The Savina Museum of Contemporary Art’s newest exhibition wants visitors to care about animals, especially the ones going extinct.

According to the Intergovernmental Science-Policy Platform on Biodiversity and Ecosystem Services (Ipbes), around one out of eight plant and animal species today will face extinction in the next few decades due to human destruction and climate change.

The exhibition, titled “We Are Each Other’s Destiny: An Artistic Embrace of Endangered Animals,” brings together the works of Koh Sang-woo, Kim Chang-kyum and Russ Ronat, three artists with varying techniques and styles, to paint an urgent picture of the existential threats many animals face today.

Bright blue animals demand attention in works by digital artist Koh, who uses negative photography to create the jarring colors. One is an Asiatic black bear, an endangered species in Korea, shown with blue fur with pink heart shapes over its eyes. The hearts repeatedly appear in works depicting other endangered animals, such as elephants and lions, all of which seem to be pleading for help with their piercing gazes. 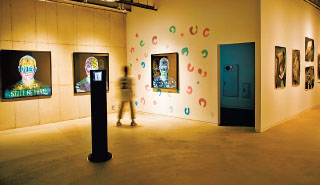 “We Are Each Other’s Destiny: An Artistic Embrace of Endangered Animals” is the Savina Museum of Contemporary Art’s newest exhibition showcasing works of three artists of varying styles united in their passion to preserve biodiversity. [SAVINA MUSEUM OF CONTEMPORARY ART]

“The shape of the heart symbolizes life, love and sacrifice,” Koh explained during a press briefing at Savina Museum in northern Seoul last Wednesday ahead of the exhibition’s launch. Kim and Ronat were also present.

“I hope these hearts will remind visitors that animals are lovable creatures with souls just like us.”

Having a background in performance art as well, Koh put himself in the shoes of endangered animals in “Man in the Box” (2019), a video piece of the artist painting himself with leopard-style spots as captions like “I once had freedom” appear on screen. For many of his works, Koh was inspired by animals that roamed Korea just a few decades ago but have since disappeared, including tigers and leopards.

Contrary to Koh, Ronat’s works are unembellished portraits of endangered animals from across the world, such as a white rhinoceros and a sea turtle. Ronat’s works on display at the Savina Museum are part of a series of paintings and drawings he began working on beginning in 2017, titled “Project Holocene,” a reference to the ongoing extinction of species caused by human activities.

“I like things to have gestures or movements and feel free and wild, and my goal with every drawing is to capture the feeling and spirit of the animal,” said Ronat. “It’s more important for me that [the drawing] is alive than it is clean or neat or refined.”

Ronat has a colorful history of working with different wildlife groups like the Global Wildlife Conservation and Bonobo Conservation Initiative to bring awareness to the plight of threatened animals.

It’s worth noting that both Koh and Ronat only showcase one or two animals in each artwork at a time. For Ronat, it’s a deliberate move.

“If you see a photograph of a child who’s in need, donations for charity are very high. If you show two or three children, the percentage drops off a lot,” he explained. “If you show 100,000, no one gives anything because you can’t feel the suffering of a big group of people, you can only feel the single.”

Kim chose to emphasize the importance of coexistence through his media and video works. The artist employed Buddhist elements such as the mandala, a ritual symbol that represents the universe, to create a sense of serenity. In “Water Shadow Animals” (2019), for example, images of endangered animals like elephants and deer appear one by one on the surface of an intricately-decorated bowl made to look like it’s filled with water.

In case the forlorn expressions of endangered animals fail to touch visitors, interactive installations ensure the message hits home. “Fine Dining” (2019) by Bang Eun-young uses augmented reality (AR) technology to elucidate the problem of plastic waste. When visitors hover a smartphone provided at the exhibition over plates set on an elegant table, the screen shows a cooking demonstration of foods like spaghetti, with ingredients replaced by plastic bottle caps or straws.

“Animal Kiosk” (2019) by Reasoning Media assesses people’s eco-friendly habits through a 10-question survey. The 30sec Hug Project offers visitors a chance to have their own works displayed at the museum. Anyone can submit a 30-second-long video about environmental protection to the email address 30sechug@gmail.com, and the museum will play the videos as part of the exhibition.
BY KIM EUN-JIN [kim.eunjin1@joongang.co.kr]