As part of Seoul City’s “Darrara Trip” festival, there will be performances by the K-pop male duo Norazo, left, and the dance team Diana, right. [SEOUL FOUNDATION FOR ART AND CULTURE]

Summer is when the whole country becomes filled with festivals and the Seoul city government has jumped on the bandwagon by announcing that it will launch “Darrara Trip” at Citizens Hall, located at Seoul City Hall, central Seoul.

With the theme of “Being different and being yourself,” the three-day festival kicks off on Friday and runs through July 28.

Seoul Metropolitan Government said in a press release that the festival is designed to help people understand how similar and different they are from one another.

The festival will include an exhibition, live performances and hands-on activities.

Some of the interactive programs include Attic of a Traveler, a booth at which festivalgoers are able to draw and decorate their own rooms.

The drawings will later be put on display and used as the backdrop of a photo zone at the festival.

Next to the Attic of a Traveler booth, there will be another event for those who want to relieve their stress. Visitors will be encouraged to write down their worries and throw away the notes later. 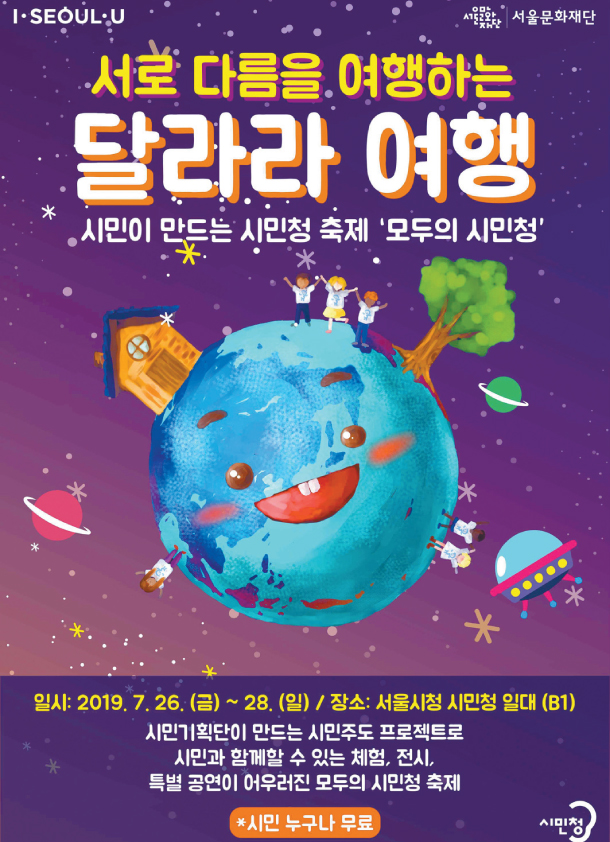 An exhibition entitled “Gagahoho - Layered Memories” is also open to anyone from 10 a.m. to 8 p.m. in the first basement level of the Citizens Hall. Gagahoho is roughly translated to “every single house.”

The exhibition displays different interpretations of houses by local artists. The exhibition closes at 4 p.m. on the last day of the festival.

At 1 p.m. everyday, there will be live performances at the lounge.

Of all the musicians, K-pop duo Norazo, B-boy group Gamblerz Crew and the Diana dance team, which has more than 400,000 subscribers on YouTube, will perform on July 27.

A Korean traditional dance team and Korean dancers who will perform Tahitian folk dance will take the stage the next day.

The festival is entirely free of charge.

In order to get to the Citizens Hall, get off at the City Hall Station, line No.1 or No.2, exit 4.