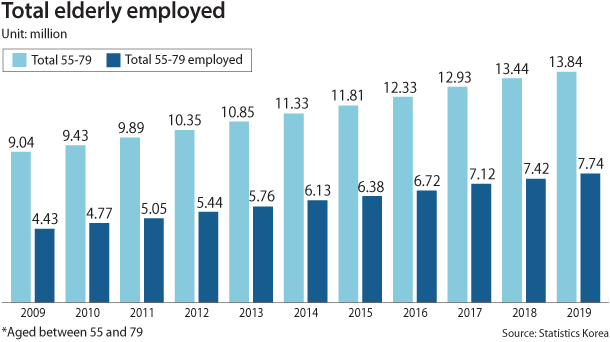 Korea is aging fast, but it is retiring more slowly than ever.

Due to a variety of factors, a record number of elderly are choosing to work later in life.

Some have no choice in the matter. Their retirement savings are too small and they simply need the income.

According to a study by Statistics Korea released on Tuesday, as of May this year, 7.74 million of the 13 million people between 55 and 79 are continuing to work. That’s 55.9 percent, a full 4.3 percent higher than in May 2018 and the highest level since the relevant statistics were first compiled in 2009.

The number of people choosing to continue working has been steadily increasing.

Men are more likely to stay in the workforce, with 4.39 million, or 66.6 percent of elderly men, delaying their retirement. However, the number of elderly women still working has also grown compared to the previous year.

Even the number of older people looking for jobs has gone up. Nearly 2.6 million Koreans aged 55 and 79 searched for employment in May 2019. That’s a 14-percent increase from the 2.3 million the previous year.

And more are willing to work.

The study found that nearly nine million people, 64.9 percent of all senior citizens, were up for employment, which is a 0.8-percentage-point increase, or 186,000 more, than the previous year.

This is also a record high.

While the average age of preferred retirement was 73, way beyond the legal retirement age of 65, the older population, aged between 75 and 79, wanted to work until 82.

The main reason for working so late in life is earning living expenses, at 60.2 percent. The second reason given was the joy of work, at 33.9 percent.

The situation could worsen. In 2017, 14 percent of Korea’s population was 65 or older. That’s just 17 years after the country passed the threshold as an aging society.

While social costs are expected to rise, Korea’s potential growth is expected to fall to 1.98 percent starting next year and remain below 2 percent until 2028.