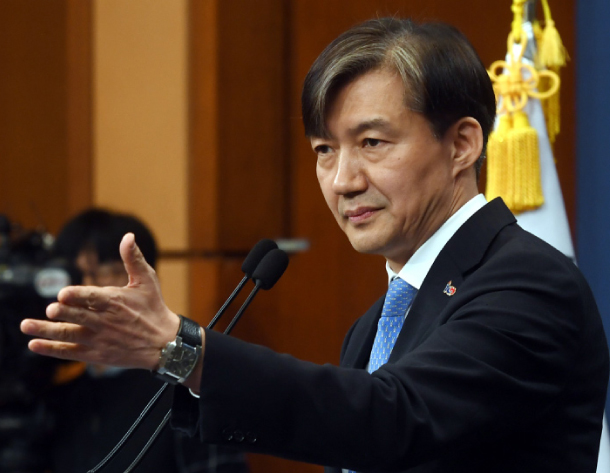 Cho Kuk, a senior presidential secretary for civil affairs, answers questions from reporters on the issue of reforming the prosecution and the police last month. [JOINT PRESS CORPS]

The charm of a fable is the lesson, while the story may be cheesy. That’s how I felt when I recently heard the story of a big mouthed frog’s concert. An elephant is conducting a chorus of animals and noticed that a big-mouthed frog is singing out of tune. In order to not hurt the frog’s feelings, the elephant says, “The big mouthed animal should read the music and sing.” Then, the big-mouthed frog tells an alligator to be careful.

The mistake is repeated. The elephant then said, “I am warning the big mouthed animal that lives in the water and on the land. I’ll kick you out if you make another mistake!” Then the frog sobs and says, “Poor hippopotamus.” The fable points out the absurd attitude of not realizing one’s flaws and criticizing others.

Blue House Senior Secretary for Civil Affairs Cho Kuk’s nickname in college was “The big-mouthed frog.” The main opposition Liberty Korea Party’s floor leader Na Kyung-won, who was in the same class at Seoul National University majoring in law, mentioned it on television. Coincidently, his stance against Japan’s economic retaliation matches nicely with the nickname. To me, his social media posting suggests that he is never wrong. It is clearly based on his knowledge, belief, patriotism and sense of responsibility. But I cannot gladly applaud. It may be my limit, as I lack ethics — as Cho says.

Here’s another story of a frog from Jesuit priest and psychotherapist Anthony de Mello’s book, “The Prayer of the Frog.” A monk is praying in a hut in the mountain and is mad at the loud sound of frogs. He shouts out why they are interfering with his prayer. After shouting a few times, he hears the voice of the God: “Why do you think you are praying alone? Why can’t frogs pray in their own way?” If you change your mindset, the noise can feel like a prayer. This may be the wisdom that an aid to President Moon Jae-in must have if he is really praying for the success of his boss. I sincerely want Cho to take my advice.