Kim shows off his new submarine

Kim shows off his new submarine 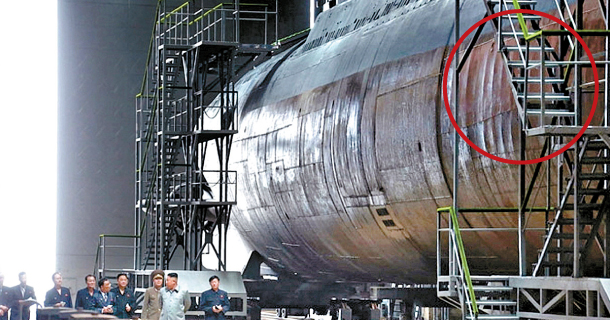 North Korea’s state media reported Tuesday that its leader Kim Jong-un inspected a newly-built submarine that awaits “operational deployment” in waters off its east coast, in what local pundits saw as a warning to the United States as denuclearization talks languish.

Without revealing the date or location of Kim’s visit, the Korean Central News Agency (KCNA) said in an English report that the young leader expressed great satisfaction over the fact that the submarine was designed and built to be capable of “fully implementing the military strategic intention” of the North’s ruling Workers’ Party in “various circumstances.”

The submarine, said the report, “will perform its duty in the operational waters of the East Sea of Korea and its operational deployment is near at hand.”

The KCNA article continued that Kim stressed the need to “steadily and reliably increase” North Korea’s national defense capability by “directing big efforts to the development of the naval weapons and equipment such as submarine.”

Three photos ran with the article, which included what appeared to be a side view of the submarine.

The official said there’s a high chance the submarine in the KCNA article is being built in or near North Korea’s factory zone for submarines in Sinpo, a coastal city of South Hamgyong Province.

Exactly why Pyongyang is building a new submarine is unknown, but the official said the South Korean government received a “tip-off” that Pyongyang was building a submarine to fire missiles from the seas. The source noted that the regime, in the past, test-fired a missile from a modified submarine.

It was the first time North Korea has ever revealed that it is building a submarine through its state media, according to the local source, which is why Seoul is keen to figuring out Pyongyang’s intentions behind the publicity.

A former South Korean high-level military official admitted the latest KCNA article was out of the ordinary, saying it’s “common sense” for countries not to reveal construction of a submarine because doing so would undermine their national security and defense capacity.

Moon Keun-sik of the Korea Defense & Security Forum floated the possibility that North Korea actually got its “new” submarine from Russia.

“If you look closely at the photo” of the submarine in the KCNA article, said Moon, “you can see there are dents that appeared to have been caused by water pressure.”

Moon, a former commander of a South Korean Navy submarine squadron, continued, “Those are traces that normally can’t be found on a newly built submarine, which is why I think [North Korea] got a golf-class submarine from Russia and is now trying to build a missile launching tube in it.”