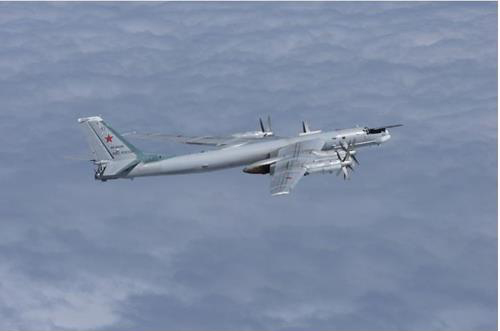 This image captured from Japan's Defense Ministry website shows a Russian bomber that violated its airspace on June 20, 2019. [YONHAP]

The bomber trespassed in the national air space above the East Sea near South Korea's easternmost islets of Dokdo earlier in the day for two brief periods in breach of international treaties, according to officers from the Joint Chiefs of Staff (JCS).

In response, the Air Force deployed multiple jets, including F-15Ks and F-16Ks, to track the plane. They fired flares and warning shots after sending messages in accordance with standard procedure. The Russian aircraft then left the airspace after three minutes and left the KADIZ at around 9:15 a.m.

At around 9:33 a.m., however, it again violated South Korea’s air defense identification zone and then its national airspace. Following further military actions, the aircraft left the airspace four minutes later. It finally flew out of the air defense zone at 9:56 a.m.

It is the first time that a Russian warplane has violated South Korean national airspace, though KADIZ violations by Russian aircraft have occurred occasionally.

The incident followed a separate KADIZ violation case by two other Russian and two Chinese aircraft earlier in the day.

At around 6:44 a.m., two Chinese warplanes flew into the KADIZ above the East Sea and stayed for about 30 minutes. About 36 minutes later, they re-entered the air defense zone and stayed there about 30 minutes before leaving the zone at 8:20 a.m.

The Chinese aircraft then joined two Russian bombers and flew southward together over the East Sea. The four encroached upon KADIZ at around 8:40 a.m. for a 25-minute flight, according to the JCS officer.

The purpose of their joint flight and intentions behind the series of breaches were not immediately clear.

The Ministry of National Defense plans to call in officials of the Russian and Chinese embassies later in the day and lodge a protest in a grave manner, the officer noted.

Air defense identification zones, known by their initials ADIZ, are unilaterally set by countries, aren’t subject to international treaties or agreements and are larger than traditional national air spaces. Some countries require aircraft that enter the zones to provide identification and flight plans, but usually only if they are headed to a destination in that country, not if they’re just passing through.

In the previous such incident, two Russian military aircraft violated KADIZ on June 20 and stayed in the zone for about a half-hour.