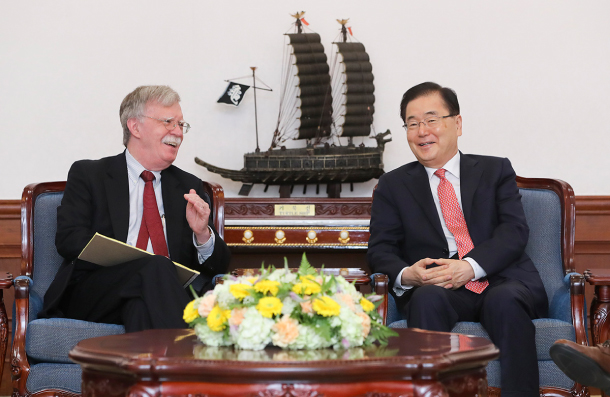 Seoul and Washington agreed Wednesday to cooperate in measures to promote freedom of navigation and maritime security in the Strait of Hormuz, fueling speculation that Korea may send troops to the region.

“The two sides shared a consensus on the need for international efforts to guarantee safe navigation of civilian and commercial vessels,” Ko said in a statement concluding their discussion. “With regard to the matter, they agreed to continue consultations on cooperative measures for maritime security and freedom of navigation in the Strait of Hormuz, in particular.”

After Iran attacked Japanese and Danish tankers off Oman in June and seized a British oil tanker traveling in the strait between the Persian Gulf and the Gulf of Oman on July 19, the United States is seeking allies to safeguard the strategic waterway, where 20 percent of the global oil supply flows.

“We’re engaging now with a number of countries to see if we can put together a coalition that would ensure freedom of navigation both in the Strait of Hormuz and the Bab-el-Mandeb,” Marine Gen. Joseph Dunford, the chairman of the U.S. Joint Chiefs of Staff, said earlier this month.

Other pending security issues were also discussed during the Bolton-Chung meeting, according to Ko. Chung explained to Bolton that Seoul took stern countermeasures after military planes from China and Russia violated the Korea Air Defense Identification Zone (Kadiz) on Tuesday, and Bolton said Seoul and Washington must have close consultation if a similar situation takes place in the future.

The two sides agreed to cooperate to restart negotiations between Pyongyang and Washington on North Korean denuclearization.

Seoul and Washington also agreed to negotiate the cost-sharing arrangement for the U.S. Forces Korea after 2020 in the “most reasonable and fair” direction.

According to Ko, the two sides reaffirmed that the Korea-U.S. alliance goes beyond the Korean Peninsula and it is the linchpin of regional peace and stability. “They also agreed to strengthen the alliance in the bilateral, regional and global dimensions,” she said.

The snowballing diplomatic row between Korea and Japan was also discussed, Han Jung-woo, deputy spokesman of the Blue House, said. “It was expressed as Seoul and Washington’s agreement to strengthen the alliance in the regional and global dimension,” he said.

The statement hinted that Bolton and Chung could have discussed the fate of a military intelligence-sharing agreement between Korea and Japan. As Korea tries to deal with potentially crippling export restrictions by Japan, speculation has grown that the Moon Jae-in administration may respond by scrapping the bilateral General Security of Military Information Agreement (Gsomia). A top presidential aide said last week that Seoul is considering “all options,” hinting that it may oppose an automatic extension of the pact.

The United States has said that the agreement is key to trilateral security cooperation.

According to Han, Bolton and Chung had a discussion at the Blue House for one hour and 15 minutes and a working luncheon at a hotel for one hour and 20 minutes. In between the two meetings, Bolton met with Defense Minister Jeong Kyeong-doo.

Despite the announcement, no specific discussion reportedly took place on the fate of Gsomia. During his meeting with Jeong, Bolton also did not make a direct request for Korea to dispatch troops to the Strait of Hormuz, sources said.

While there was no request, the Ministry of National Defense has been considering a plan to send troops to the area to protect Korean tankers.

According to military sources, dispatching the Cheonghae Unit, which has been operating in the waters off Somalia on an anti-piracy mission since 2009, to the Strait of Hormuz is considered a strong possibility.

Because the overseas deployment of that naval task force was already approved by the legislature, the military can change its operating area without a new approval by the National Assembly.

The issue was also addressed during Bolton’s meeting with Foreign Minister Kang Kyung-wha in the afternoon. “There are many challenges out there, some in this part of the world, some in other parts of the world, but I am confident that the ROK [Korea] and U.S. will work very closely together to resolve them,” Bolton told Kang as they started the meeting.

“We are of the same spirit and also let me thank you for your leadership beyond this region and in other regions where there are challenges, where tension is rising, especially in the Strait of Hormuz,” Kang responded. “I think your leadership in trying to keep things stable in that region has been very much appreciated and we are fully supportive of that.”

The Korean government is paying particular attention to the issue. About 70 percent of Korea’s oil imports go through the passage.

“I met with Bolton around 8 a.m.” Na said at a meeting of senior party members. “I requested the meeting and I delivered the LKP’s position on the national security issues.”

She said she stressed the importance of the Korea-U.S. alliance amid the escalating security concerns such as a recent violation by a Russian plane of Korea’s sovereign air space. “I also stressed that Japan’s economic retaliations do not at all help Korea-Japan-U.S. trilateral security cooperation. It was a very meaningful meeting.”

The meeting quickly fueled speculation that the United States is seeking support for Korea’s deployment of troops to the Middle East. An overseas deployment, if Seoul decides to send a new unit, requires National Assembly approval and the opposition parties’ cooperation is crucial.

In April 2003, the liberal Roh Moo-hyun administration submitted a motion to dispatch troops to Iraq, and it was passed largely based on the support of the main opposition Grand National Party, a predecessor of the LKP.

At the time, the ruling Democratic Party (DP) was split; 49 lawmakers supported the deployment, while 43 voted against it. The motion was voted against by a total of 68 lawmakers, and 63.2 percent were members of the ruling party.

Those who voted against the motion are key members of the Moon administration and the ruling party, such as DP Chairman Lee Hae-chan and former presidential chief of staff Im Jong-seok.

The motion was passed with 179 votes, with 118 from the Grand National Party.

“I think the United States is paying attention to the LKP and its stances on various pending issues,” Na said. She, however, refused to make public what Bolton said during their meeting.