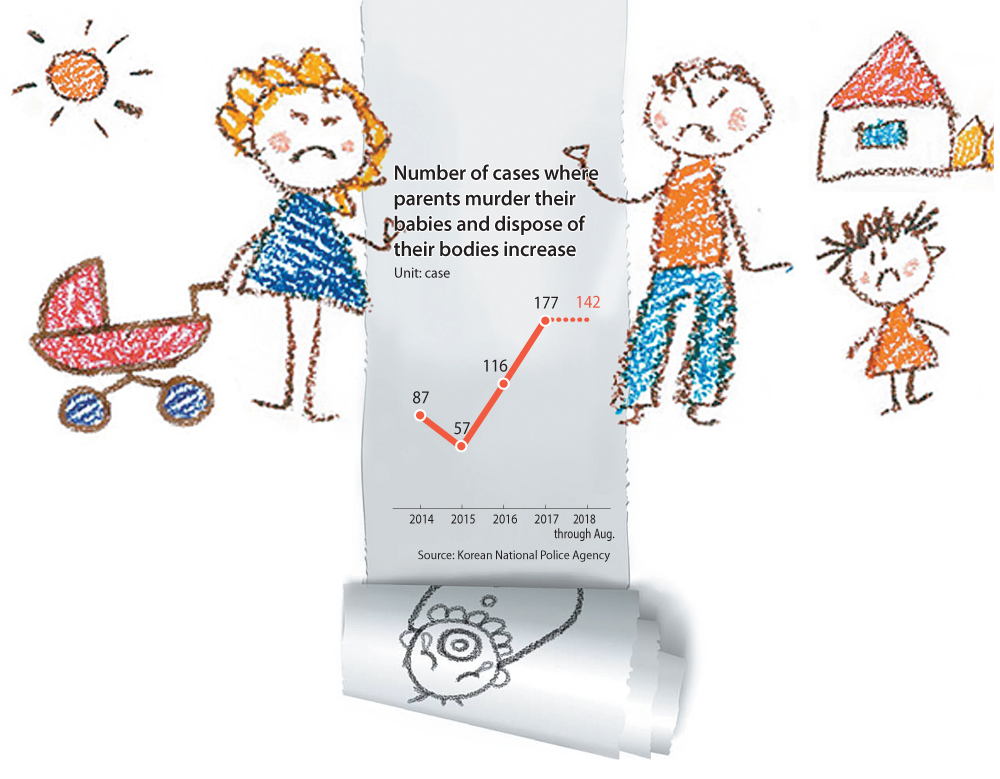 For months, a 40-year-old mother in Incheon brutally beat her baby.

In January 2018, the boy, then just 8 months old, died from his mother’s abuse. She put her son’s body in a bag and hid it on the veranda of her house, but was soon found out and was arrested by police.

The mother could have been sentenced a maximum of 42 years for murder, hiding the body of a child and child abuse. However, she was only sentenced to 10 years in prison by the Supreme Court in February this year.

The mother received a light sentence compared to the gravity of her crimes because the court took into consideration several circumstances behind the event, like her unfortunate childhood and stress due to child-rearing.

“We decided that the circumstances of [the defendant] could be weighed in as [the defendant] had a deprived childhood,” the judge said in handing down the verdict. “Her parents divorced each other when she was young and she was under extreme stress due to responsibilities like child-rearing and housekeeping.”

According to police, the number of parents murdering their babies and disposing of their bodies increased from 87 cases in 2014 to 142 cases from January to August 2018.

Korea’s criminal law system has a big loophole that gives parents who murder their children a discounted sentence, even though they killed a family member. There are a number of cases where parents who kill or abuse their children are given a lighter sentence because of their relation to the victim and the victim’s age.

Korea’s Criminal Act defines crimes differently based on the victims’ stage in life, such as babies, infants and teenagers, but does not specify the specific ages that define these stages in life, which is left for the judge to decide.

According to Article 251 of the Criminal Act, “A lineal ascendant who kills a baby while being delivered or immediately after the delivery in order to avoid disgrace or for fear of the impossibility of bringing the baby up or for some other extenuating motive shall be punished by imprisonment for not more than 10 years.”

There is a debate on whether the article violates the rights of defenseless children or is a justifiable exception for parents who faced unfortunate circumstances. Compared to murdering a person that is not one’s own baby, which has maximum penalty of death, parents who murder their babies due to their inability to raise the baby can receive a maximum sentence of 10 years.

“There are numerous cases where the horrible pain the children had to go through and the child’s [nonexistent] future is not considered in the court’s decision,” said Gong Hye-jeong, the head of the Korea Child Abuse Prevention Association. “On the other hand, there are cases where the perpetrator’s situation is considered among various conditions leading to their sentence being reduced to a light punishment.”

“I understand the difficult situations of single mothers who kill their own children, but it is hard for me to understand those who do not attempt to send their child to an orphanage or try to get support and still get a reduced sentence after committing murder,” Gong added.

However, there are parents who are actually under difficult circumstances and have to resort to extreme choices that need to be considered as well, some experts claim.

“It depends on the case, but when a single mother can’t ask for anyone’s help or is in a situation where she is under extreme terror, it isn’t always the answer to punish the crime with a heavy sentence,” said Kim Eui-ji, a lawyer at the law firm Seodam. “This is especially true for underage parents who do not have the ability to take care of their child, which makes it hard to hold them fully responsible.”

The fact that parents who murder their children receive reduced sentences compared to other murderers is facing public criticism.

“Babies or young children cannot express themselves clearly, and even if they are abused, their [situation] is not known to people around them, so there are many cases where they are neglected and defenseless,” said Lee Sue-jung, a professor of criminal psychology at Kyonggi University. “This is especially true when a murder takes place, as there are no onlookers or people who can assist the case by testifying, and even if the child survives the parent’s attempted murder, children are unable to give a proper statement, so there are many cases where it is difficult to investigate on the case.”

“Without proving the abuse or the perpetrator’s intentions, it is hard to charge people with murder for neglecting or leaving [their children out],” said a central district court judge.

Compared to Korea, many other countries punish parents who kill their children with heftier sentences than Korea.

A father in the U.S. state of Georgia who left his 22-month-old son in a car was sentenced to life in prison without parole in 2016. In France, if parents or grandparents’ abuse of a child under 15 leads to the child’s death, the perpetrator is sentenced to a minimum of 30 years in prison. When a child abused by their parents or grandparents is disabled physically or mentally due to the abuse, perpetrators face at least 20 years in prison. Germany and Britain also deem child abuse and murder a serious crime and sentence parents who kill their children to a maximum sentence of life in prison for murder.