British swimming star wants all athletes to have a voice

British swimming star wants all athletes to have a voice

British swimming star Adam Peaty doesn’t just race for himself. He wants to work for fellow athletes to ensure they all have “a voice.”

At a press conference on Thursday on the sidelines of the FINA World Aquatics Championships in Gwangju, Peaty spoke about having a union that can represent athletes. 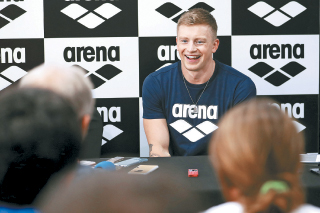 British swimmer Adam Peaty speaks at a press conference in Gwangju on Thursday, on the sidelines of the FINA World Aquatics Championships. [YONHAP]

“It’s not about money for athletes. It’s more about having a voice, changing the sport for the good and having exposure,” the seven-time world champion said. “Obviously, at the moment, we’re a bit scattered. We don’t know what to change. It’s not necessarily about attacking anyone or FINA. It’s about getting more of what athletes deserve and having a voice. And I think once the athletes start to be properly listened to, everyone can benefit.”

Penny Heyns, head of FINA’s Athletes Committee, who was in attendance, told Peaty that the athletes should appoint a spokesperson of sorts who can serve as a liaison between the athletes and FINA. The exchange between Heyns and Peaty could have turned pointed, with Heyns saying FINA was trying to set up a meeting with the athletes and Peaty saying he wasn’t aware of the development. But in the end, they agreed to foster communication between the two sides.

“If we all approach you with different questions, there should be more streamlined service from the Athletes Committee to reach out to us,” Peaty said. “Until now, everyone thinks it’s union against FINA. It’s not like that. It’s about getting the best interest for the athletes.”

Peaty was speaking against the backdrop of controversy stemming from incidents during medal ceremonies in Gwangju.

One of Peaty’s British teammates, Duncan Scott, was a central figure in a medal podium row with Chinese swimmer Sun Yang after the men’s 200 meter freestyle final on Tuesday.

Sun is accused of having destroyed vials of a blood sample from a test last year and could face a lifetime ban if found guilty. FINA still cleared him to compete in Gwangju, but the World Anti-Doping Agency has appealed that decision at the Court of Arbitration for Sport.

In an apparent protest at Sun’s presence in Gwangju, Scott, a co-bronze medalist, refused to stand in the center of the podium alongside Sun for photos, the gold medalist. Scott also refused Sun’s offer of a handshake, prompting the Chinese to reportedly yell, “You’re a loser. I’m a winner!”

After the medalists came down to the pool deck for more photos, Scott refused to join them and kept walking back to the dressing room, drawing jeers from the Chinese section in the stands and cheers from everyone else.

Two days earlier, Australian swimmer Mack Horton had also kept his distance from Sun after winning silver behind the Chinese competitor in the 400 meter freestyle.

Both Horton and Scott were warned by FINA for their “inadequate behavior.”

Peaty said he admired Scott and Horton “for taking their stance against doping,” and the fact that FINA warned them showed “the climate the athletes have now in the arena.”

Peaty has been dominating the men’s breaststroke races in recent years. In the 100 meter breaststroke semifinals on Sunday, Peaty clocked 56.88 to break his own world record of 57.10.

The following day, Peaty won the final in 57.14 and became the first to win the men’s 100 meter breaststroke three times.

He picked up his second gold medal of the championships on Wednesday, winning the 50 meter breaststroke title in 26.06. No one else has won this event more than twice.

Asked if he has to stay self-motivated given the considerable gap with the rest of the field, Peaty said he won’t have trouble maintaining his focus.