Two Korean swimmers reached the semifinals of their respective races at the World Championships on Thursday, by far the most productive day for the host nation so far.

Lee Ju-ho qualified for the semifinals in the men’s 200 meter backstroke at the FINA World Aquatics Championships, becoming the third swimmer from the host country to reach that stage in this competition. 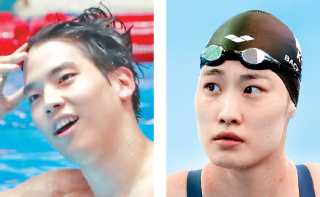 From left: Lee Ju-ho, Back Su-yeon

Moments later, Back Su-yeon qualified for the semifinals in the women’s 200 meter breaststroke, finishing right on the number in 16th place in 2:26.56.

Back finished 0.21 ahead of the 17th-place Yu Jingyao of China.

This is the fifth day of the swimming races at this competition, and only one Korean - Kim Seo-yeong in the women’s 200 meter individual medley - has reached the final. Park Su-jin is the only other to reach the semifinals, having done so in the women’s 200 meter butterfly Wednesday. She only qualified after a swimmer who finished ahead of her in the heats withdrew.

Earlier on Thursday, Jeong So-eun missed the cut in the women’s 100 meter freestyle heats, finishing 35th out of 93 with a time of 55.86.

Matthew Wilson of Australia topped the heats in 2:07.29, 0.93 ahead of the defending champion, Anton Chupkov of Russia.

In the women’s 4X200 meter freestyle relay, Korea finished 12th in the heats, missing the final but earning a spot in the 2020 Tokyo Olympics in the process.