The Korean economy grew 1.1 percent in the second quarter compared to the previous period, according to an advance estimate released by the central bank, as a pickup in government spending offset faltering exports and investments.

The recent quarterly growth represents the highest since the third quarter of 2017 and a decisive rebound from the first quarter reading of 0.4 percent. On an annual basis, the economy expanded 2.1 percent. 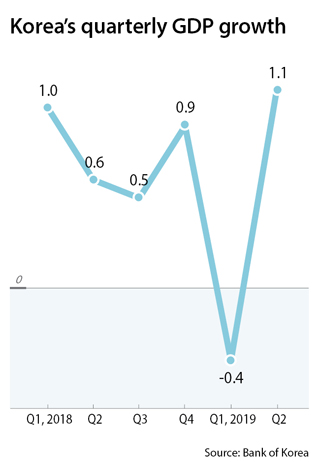 Export growth was a modest at 2.3 percent on quarter and 1.5 percent on year as the country faces a double whammy of a slump in the price of semiconductors, one of the country’s key export items, and a general slowdown in the global economy.

A large chunk of spending from government’s coffer kept growth above 1 percent.

“Government expenditure contribution to growth expanded with the execution of budgets and the payout of financial grants,” said Park Yang-soo, head of the Economic Statistics Department of the Bank of Korea.

Government spending increased 2.5 percent between April and June compared to the first quarter, and on year, it grew 7.3 percent.

Park said that the key factor for the rest of the year is private sector investment and shipment.

The central bank slashed its 2019 growth outlook by 0.3 percentage points from 2.5 percent to 2.2 percent last week and trimmed the country’s potential growth rate from 2.8 percent to 2.9 percent.

To achieve the new growth estimate, the third and fourth quarters should be in a range of 0.8 percent to 0.9 percent.

The second half of the year won’t likely be all that strong as major institutions continue to downgrade estimates.

The International Monetary Fund is also pessimistic. It trimmed its forecast for global economic growth again, saying that the world economy is expected to expand by 3.2 percent in 2019, down 0.1 percentage points from its April projection.