Fall of the Gangnam Left?

Fall of the Gangnam Left? 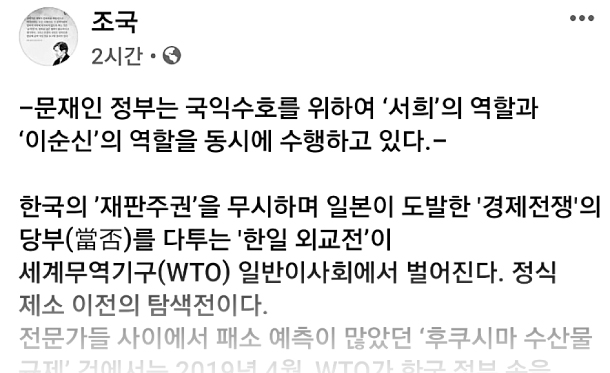 On Facebook, Cho Kuk, a senior presidential secretary for civil affairs, harshly attacks Japan for waging an economic war on Korea defying Korea’s judicial sovereignty. He says the Moon Jae-in administration is using the wisdom and courage from diplomat Seo Hee from the Goryo Dynasty (918-1392) and from Admiral Yi Sun-shin, who saved the Joseon Dynasty (1392-1910) from the Japanese invasion from 1592 to 1598.

It was around 2006 that the Gangnam Left were first openly mentioned. It is the Korean version of rich liberals, similar to Champagne socialists or the Caviar left. Yonsei University’s sociology professor Kim Ho-ki said Gangnam symbolizes social prestige and clashes with the conventional image of leftists. It’s also a mockery that they advocate equality on the surface yet are hypocrites who are looking out for their own interests.

President Moon Jae-in’s Senior Secretary for Civil Affairs Cho Kuk, a Seoul National University professor of law at the time, is considered to have contributed to diluting the negative image of the Gangnam Left. Chonbuk National University’s journalism professor Kang Joon-mann wrote in his 2011 book that Cho’s strengths were “handsome appearance, the competent and sophisticated image and the cool stance of admitting that he is a Gangnam Left.” As a professor, Cho said, “It is a mechanical mind set to assume that rich people are conservative and poor people are leftists.” The group became more influential as the liberal 386-generation has become the high-income professionals. The Gangnam Left has become a fantasy of average people who reject the irrationality of the existing order and embrace vulnerable people while enjoying a comfortable life.

But the weight of a public servant might have been heavy even for the Gangnam Left. I find Cho’s latest Facebook postings quite puzzling. He wrote, “What’s important is whether you are patriotic or benefiting the enemy” on July 18, “Those denying the Supreme Court’s ruling on wartime forced labor are Japanese collaborators” on July 20 and “The Moon Jae-in administration is simultaneously playing the roles of diplomat Seo Hee [a wise diplomat in Goryo Dynasty (918-1392)] and Admiral Yi Sun-shin in Joseon Dynasty (1392-1910)” on July 21. Hanshin University Prof. Yoon Pyeong-jung said it was contradictory that a Gangnam Left advocating freedom openly expressed nationalist and totalitarian concepts that he despised.

New York University’s political science Prof. Bernard Manin said that the reality that we witness today is only the rise of new elites and fall of other elites. Has the effect of the Gangnam Left expired?