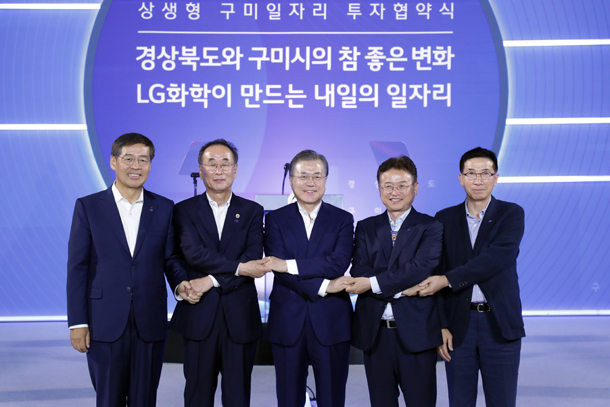 LG Chem will invest 500 billion won ($423.9 million) to build a battery component plant in Gumi, North Gyeongsang as part of a partnership with the city government to boost the local economy.

The battery maker announced Thursday that it will establish a new plant in the southeastern city with a capacity of 60,000 tons of cathode material per year. It is expected to start operations in late 2022.

The material is a key component in battery production, taking up 40 percent of material costs, according to LG Chem.

The battery maker’s investment is part of an agreement made on Thursday with the Gumi city government and the North Gyeongsang provincial government to create new jobs for the regional economy.

In return for the investment, the two regional governments will provide LG Chem with administrative and financial support. A spokesperson for the company declined to elaborate on the details of the government support.

Partnerships between the private and public sector are becoming more common to help depressed regional economies.

“The cooperative regional employment plan is a path to stimulate the regional economy and revive our manufacturing,” said President Moon Jae-in at a signing ceremony for the agreement in Gumico, a convention center in the city.

“Considering that it is a national task to reduce overseas reliance on core materials, Gumi’s agreement will meet the expectations of industries that hope to improve competitiveness,” said Moon, highlighting the need for domestic production of industrial materials in the wake of Korea’s trade row with Japan.

Moon added that the government will provide support in health care and social welfare to create similar partnerships in the future.

This partnership follows the so-called Gwangju job model, which was developed by Hyundai Motor and the southwestern city of Gwangju earlier this year.

Under Gwangju’s plan, Hyundai Motor agreed to build an auto factory in the city in return for municipal support that led to lower levels of wages for workers.

Gumi’s plan with LG Chem does not include a wage adjustment.

The plan is expected to help Gumi combat its job woes. The city recorded an unemployment rate of 4.6 percent in the second half of last year, the highest among cities in North Gyeongsang.

LG Chem is also betting on the plant to meet growing demand for batteries.

According to market researcher B3, the size of the electric vehicle battery market is expected to grow from 116 gigawatt hours this year to 569 gigawatt hours in 2025.

LG Chem is also seeking to increase its internal sourcing of cathode materials for battery production to 35 percent from the current 20 percent. The company expects to source 50 percent of the material domestically in the next three to four years.

The battery maker already has plants producing cathode material in Cheongju, North Chungcheong and Iksan, North Jeolla. LG Chem said it is planning to expand the capacity of its Cheongju plant twofold.

“Starting with the investment in Gumi, [we] will […] improve domestic production and increase competitiveness in batteries,” said LG Chem CEO Shin Hak-cheol.

“We will do our best to provide a foundation for growth with the regional economy through job creation.”