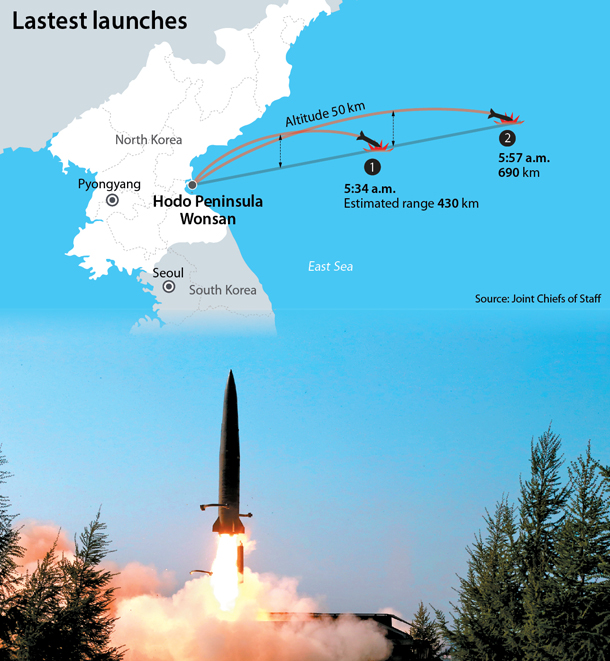 A short-range missile launched by North Korea on May 9. The map above shows the two launches on Thursday. [YONHAP]

North Korea on Thursday test fired two short-range missiles from its eastern coast into the East Sea in its latest provocation of the United States and its allies.

According to South Korea’s Joint Chiefs of Staff (JCS), the projectiles were launched at 5:34 a.m. and 5:57 a.m. from the Hodo Peninsula near Wonsan in North Korea’s Kangwon Province, with the first flying a distance of approximately 430 kilometers (267 miles) and the second 690 kilometers.

Both rockets reached an altitude of around 50 kilometers to 60 kilometers at the peak of their trajectories before landing in the East Sea. From their outward appearance and flight pattern, the projectiles appear identical to those test fired by Pyongyang last May 4 and May 9, which analysts abroad later identified as North Korean variants of the Russian-made Iskander short-range ballistic missile.

An officer of the JCS classified the rockets as short-range missiles that appeared to be fired from transporter erector launchers (TEL), though he added that U.S. and South Korean intelligence were conducting further analyses to determine the projectiles’ type.

A subsequent briefing by the JCS said the second missile that flew a longer distance may be a new type of projectile that could be altogether different from the first and the ones in May, though further analysis was needed.

The Blue House National Security Office on Thursday concluded the projectiles were a “new type of short-range ballistic missiles,” and expressed “grave concern” about the North’s actions, adding they would not help relieve tensions on the Korean Peninsula.

North Korean leader Kim Jong-un may have supervised the launches as he did in May. In recent days he took part in public activities while staying near Wonsan. State media on Tuesday reported Kim inspected a new military submarine at a naval base believed to be at Sinpo, South Hamgyong Province, not far from Wonsan. The North Korean military is also conducting regular summertime drills that may be related to the tests.

South Korea’s National Intelligence Service (NIS) on Thursday described the missile tests as muscle flexing by the North in retaliation for the U.S. decision to continue the exercises, according to a lawmaker on the National Assembly’s Intelligence Committee. The North’s Foreign Ministry statements claimed U.S. President Donald Trump had promised not to go forward with the exercises in his snap meeting with Kim in the border village of Panmunjom in late June.

Seoul’s recent deployment of F-35 fighter jets from the United States may also have been part of the North’s calculus, the NIS said, given that it published a Foreign Ministry interview on July 11 that said Pyongyang “cannot withhold from developing and testing special weapons to annihilate the deadly weapons augmented by South Korea.”

The lawmaker added the NIS could not yet make a conclusive determination on whether they were the same weapons as those launched in May. The agency’s inability to conclude whether the projectiles from May were Iskander variants was met with heavy criticism from lawmakers on the Intelligence Committee, but the NIS official responded by saying there was much still left to analyze given that the rockets were “new cutting-edge weapons.”

According to military analysts, Pyongyang’s short-range missiles from May appeared to be solid-fuel variants that can fly as far as 1,000 kilometers, putting the entire Korean Peninsula within their range.