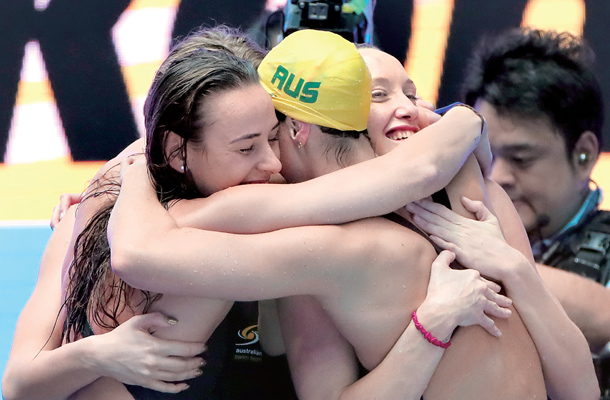 Racing in the fourth lane, Australia got off to a great start as Ariarne Titmus gave the team the lead after her 200 meters, at one minute and 54.27 seconds. Yet Madison Wilson’s one minute 56.73 seconds wasn’t enough for Australia to hold on to its lead, as the second swimmer of the United States, Katie Ledecky, finished her 200 meters in one minute and 54.61 seconds to allow the team to take the lead by 0.30 seconds.

But Australia quickly regained its lead with its third swimmer, Brianna Throssell. Following Throssell, Australia’s last swimmer, Emma McKeon, kept up the team’s lead to finish the race at seven minutes and 41.50 seconds, good enough to break the world record.

This is the third world record set in Gwangju. Caeleb Dressel of the United States continued his successful streak in Gwangju by picking up his third gold in the men’s 100 meter freestyle.

Racing in the fourth lane, Dressel got off to a strong start by taking the lead at the first 50-meter point, at 22.29 seconds. He continued to maintain his lead in the remaining 50 meters to finish 0.12 second ahead of the silver medalist, at 46.96 seconds. 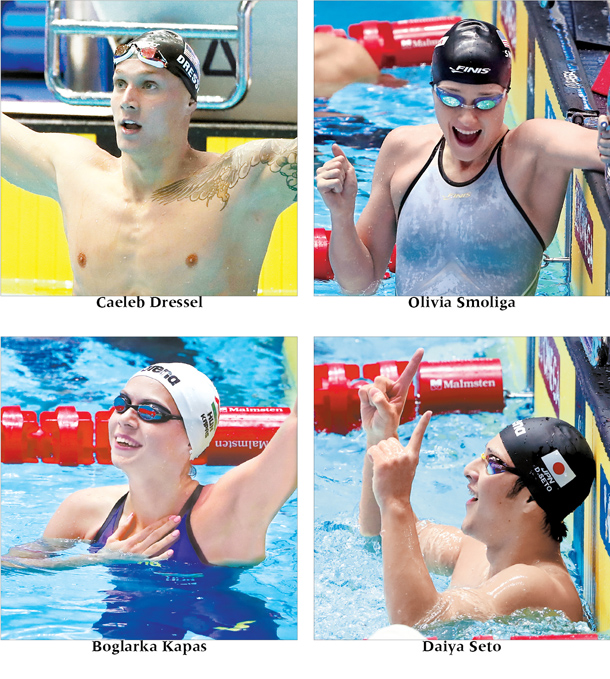 With the win, Dressel became the first swimmer to win three golds in Gwangju. This win also allowed Dressel to successfully defend his title in the event. In Gwangju, he won gold in men’s 50 meter butterfly and the men’s 4X100 meter relay, while picking up a silver in the mixed 4X100 meter medley relay.

Boglarka Kapas picked up her first gold by winning the women’s 200 meter butterfly.

Racing in the third lane, Kapas got off to a slow start by reaching the first 50-meter mark at 29.27 seconds, ranking eighth. After continuing to rank in eighth by the 100-meter point, Kapas started to speed up in her last 100 meters of the race. Reaching the 150-meter point at one minute and 33.67 seconds, ranking fourth, Kapas picked up her pace once more to finish her race at two minutes and 06.78 seconds.

In the women’s 50 meter breaststroke, Olivia Smoliga of the United States picked up gold. Despite having the second-slowest reaction time of 0.63 seconds, Smoliga sprinted in the short-distance race to finish 0.11 second ahead of the silver medalist, at 27.33 seconds.

With the win, Smoliga picked up her second medal in Gwangju. Previously, she won a bronze in women’s 100 meter backstroke.

Racing in the third lane, Seto reached the first 50-meter point in second, at 24.89 seconds, with the butterfly. Then, he moved up to take the lead with his second stroke, backstroke, reaching the halfway point of the race at 54.19 seconds.

Swimming breaststroke and freestyle for the next 100 meters of the race, Seto successfully maintained his lead until the end of the race for gold, clocking in at one minute and 56.14 seconds. By winning gold, Seto picked up his first gold in the men’s 200 meter individual medley, and became the first Japanese swimmer to do so.

Seto won two golds in the men’s 400 meter medley during the 2013 and 2015 World Championships, but has never won the 200 meter individual medley.