After being shunned twice by fellow medalists on the podium during the ongoing FINA World Aquatics Championships, Chinese swimming star Sun Yang got another cold shoulder — this time, in the pool.

Sun was an unexpected entrant in the men’s 4X200 meter freestyle relay preliminary at the worlds on Friday. 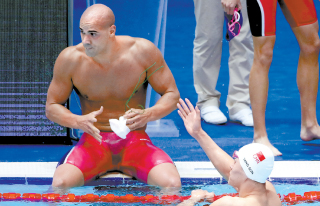 China qualified for the final, scheduled for later Friday, by finishing fifth in the heats.

After the race, Sun offered to shake hands with a Brazilian swimmer, João de Lucca, who was sitting on the pool deck. De Lucca made brief eye contact with Sun but got up from his place without taking Sun’s hand.

Sun is racing under a cloud of allegations that he destroyed vials of a blood sample from an out-of-competition test last year. FINA cleared him to compete in Gwangju, and several swimmers have bristled at Sun’s presence.

In the medal ceremonies for the 200 meter and 400 meter freestyle, Sun was snubbed by Mack Horton of Australia and Duncan Scott of Britain, who both refused to take pictures with the Chinese at the top of the podium.

Horton and Scott were warned by FINA for their behavior, and the international swimming governing body recently instituted a new rule designed to discourage similar action in the future.