Trade negotiator drums up support against Japan in U.S.

Trade negotiator drums up support against Japan in U.S. 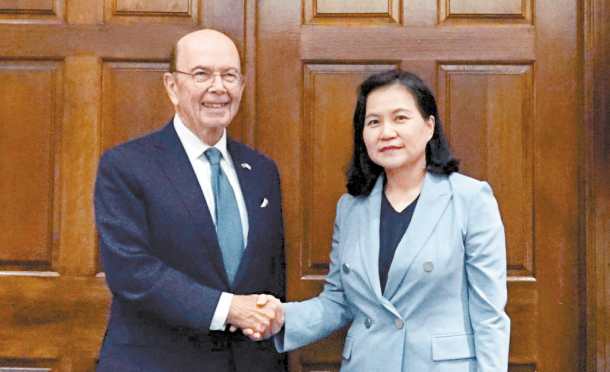 According to the Ministry of Trade, Industry and Energy on Friday, Korea’s Minister for Trade Yoo Myung-hee met with U.S. Secretary of Commerce Wilbur Ross on Thursday, and the U.S. official admitted that Tokyo’s trade restrictions on Seoul could have an impact on U.S. industries and the global supply chain.

Yoo asked Ross for help and the Commerce Secretary said that the United States would do what it can, acknowledging the need for a swift resolution.

Yoo, who visited the United States this week to raise awareness of the trade spat, also met with U.S. lawmakers such as Rep. Eliot Engel, chairman of the House Committee on Foreign Affairs, U.S. trade organizations such as the Semiconductor Industry Association and think tanks, including the Heritage Foundation.

During the meetings, Yoo explained that Tokyo’s restrictions will damage the international trade order by setting a precedent of using trade to solve a political issue. Seoul believes the restrictions are motivated by a diplomatic row over Korean court decisions on wartime forced laborers.

According to the Trade Ministry, U.S. legislators emphasized the importance of cooperation among Korea, the United States and Japan in the Northeast Asia region, while industry experts said Japan’s measures could lead to a collapse of the global supply chain.

Six U.S. trade groups sent a letter to Yoo and her Japanese counterpart, Hiroshige Seko, on Tuesday urging a quick resolution to the conflict.

Yoo said in a statement that Seoul will continue to raise awareness of the trade spat at the Regional Comprehensive Economic Partnership (RCEP) ministerial meeting in Beijing next week.

Korea criticized Japan at the World Trade Organization on Wednesday, calling the export restrictions the use of “trade as a political tool.”

Speculation was running high on whether Tokyo will expand its export restrictions by removing Korea from a list of 27 countries receiving preferential trade status.

Japan’s Yomiuri Shimbun reported Friday that Tokyo is expected to take Seoul off the list on Aug. 2. The removal could tighten export processes of over 1,000 categories of products from Japan to Korea.