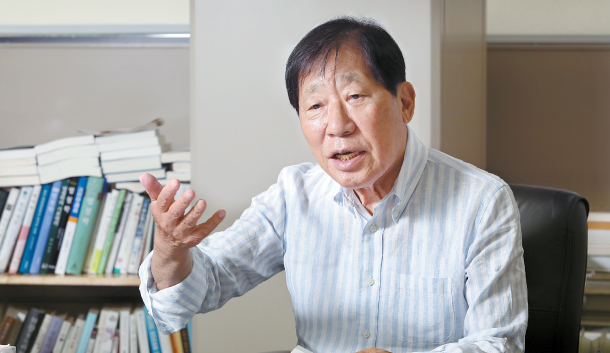 Hwang Ju-myung, chair of HMP Law, a major law firm in Jung District, central Seoul, was at the height of his “elite course” when he traveled to the United States for a visiting scholars program after becoming a judge. Then came the incident that changed his career. [PARK SANG-MOON]

It was the latest addition to his “elite life” course. Hwang Ju-myung, who graduated from Korea’s most prestigious Kyunggi High School and Seoul National University Law School, was working as a judge when he gained the opportunity one day in 1974 to travel to the United States for a year-long visiting scholars program at George Washington University.

Ten months into the program, a professor at Harvard Law suggested he stay for three more months on a fellowship, yet another achievement to add to his long list - had the Korean government allowed his wife to leave Seoul to join Hwang in Cambridge, Massachusetts.

The military dictatorship of Park Chung Hee did not.

At a time of harsh social oppression and censorship, Hwang recalled during a recent interview with the Korea JoongAng Daily that many spouses of public officials were banned from leaving the country as punishment for those officials speaking ill of the Korean government abroad.

Hwang ultimately decided not to go to Harvard - and quit his job as a judge.

“I felt like a political dissident,” said Hwang. “The U.S. State Department worker who was helping me with the paperwork [to go to Harvard] asked if I’d be okay to return to Korea if a judge’s wife can’t even receive a passport.”

After coming back to Korea, Hwang served two more years as a judge, the minimum length he was required to fulfill in return for his visiting scholars program, which was co-funded by the Korean and U.S. governments.

He exited the judiciary to become a lawyer in 1977, and went on to co-establish HMP Law in 1993, which has grown into one of the largest law firms in Korea today.

The Korea JoongAng Daily met Hwang, chair of HMP Law, at his office in Jung District, central Seoul, earlier this month to talk about his recent memoir, experiences in the U.S. and Korea’s judicial reform. The following are excerpts of the interview.

Q. The English title of your Korean book roughly translates as “Treat People like Human Beings.” How did you come up with the title?

A. After my publisher read my manuscript, he said the book title should be something about how I treated other people as human beings, unlike how they were treated by the government or how they were treating each other in society. I collected many memories of my past in writing this memoir, and I wanted to write a story of myself to tell my grandchildren what a unique lawyer I was. But my main target readership was other lawyers. Lawyers are supposed to keep the law, but Korean lawyers do not. They somehow feel superior to the law, so I wanted to tell them how wrong they are.

Do you plan to publish the book in any other languages like English?

Not at the moment because it’s hard enough to express my thoughts in Korean. It’s not what you say, it’s how you say it. As a native Korean speaker, conveying the nuance of my messages in a foreign language is hard.

Why do you think Korean lawyers think they’re above the law?

In the past, when Korea was ruled by authoritarian regimes, people who passed the bar exam to become prosecutors or judges thought they held massive influence and power in local society, and even after they left the judiciary to become a lawyer, they maintained such an arrogant mindset. That’s been passed down to Korean lawyers today.

In your book, you explained that your visiting scholar program in the United States was your turning point for leaving the judiciary. Why so?

When I was in the United States, I was really impressed by the kindness and fairness of judges there. There was a judge in Los Angeles who was presiding over a jury trial. One of the jurors said he couldn’t arrive at the scheduled date because he had a doctor’s appointment. The judge adjusted the time of the hearing to accommodate to the juror’s appointment. Such a case was unheard of in Korea. Going to court is an uncomfortable experience for everyone, so a judge’s job is to make those people feel comfortable, like the title of my book. And the experience I had with trying to go to Harvard, how I felt about the Korean government treating me badly, triggered my decision to leave the courtroom.

What’s the biggest problem in the Korean legal field?

As lawyers, we have to protect all ordinary people. But the police and prosecutors often seem eager to arrest somebody as quickly as they can. Once a person is arrested, he or she faces the perception they’re guilty. That’s why lawyers should be present when their clients are being questioned, and that must clearly be stated, protected and enshrined in law. Prosecutors try to question suspects without their lawyers present. They start off acting friendly to the suspect, but then go the way they originally planned based on the conclusion they’ve already drawn about the case.

I’m opposed to the plan about creating an independent investigative agency dedicated to investigating corruption by senior public servants because if there’s any additional public agency or government organization controlling others, that means a reduction of our [general public’s] rights. Korea doesn’t need any more investigating bodies. We have enough already.