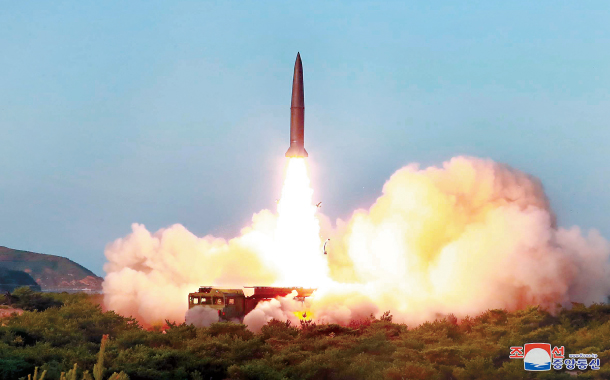 A short-range ballistic missile is launched from the Hodo Peninsula near Wonsan on North Korea’s east coast on Thursday in a photo released on Friday by the North’s Korean Central News Agency (KCNA), which it described as “new-type tactical guided weapon.” [YONHAP]

North Korea said Friday that its launch of two short-range ballistic missiles Thursday was a warning to the South to stop an upcoming joint military exercise with the United States.

North Korean leader Kim Jong-un personally organized the demonstration of a “new-type tactical guided weapon” in order to send “a solemn warning to the South Korean military warmongers who are running high fever in their moves to introduce the ultra-modern offensive weapons into South Korea and hold military exercise in defiance of the repeated warnings from the DPRK [North Korea],” the North’s Korean Central News Agency (KCNA) said Friday.

After the North fired two short-range ballistic missiles Thursday morning, speculation ran high that Pyongyang was trying to pressure Washington ahead of the denuclearization negotiations. The North, however, made clear Friday that the launch of what South Korea concluded as a new kind of short-range ballistic missile derived from Russia’s Iskander system was a warning to the Moon Jae-in administration.

According to the report, Kim complained that the South is showing “strange double-dealing behavior” as it promotes a “handshake of peace” before the world, but importing advanced weapons and holding joint military exercises at the same time.

The North, however, did not identify the South Korean president by name. Nor did it mention the United States, Seoul’s main weapons supplier and partner in the joint military exercises.

The English-language KCNA report said Kim was personally sending the warning to Moon. “He said that his advice to the South Korean chief executive to understand in time the danger the developments will possibly bring, stop such suicidal act as the introduction of ultra-modern weapons and military exercises and come back to the proper stand as in April and September last year,” the report said. 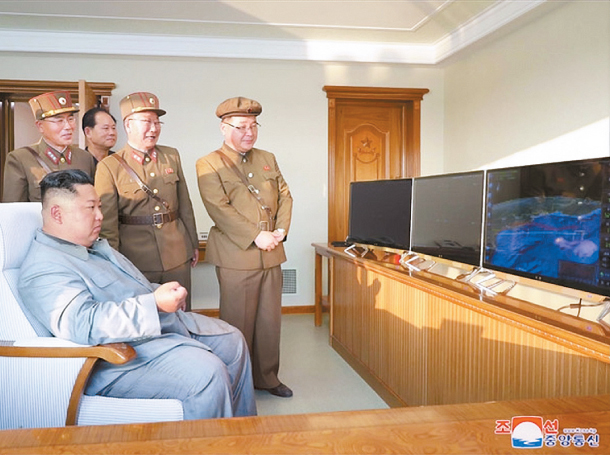 In April 2018, Kim and Moon held their first summit in the truce village of Panmunjom. A second summit followed the following month and a third summit took place in Pyongyang last September.

“The South Korean chief executive should not make a mistake of ignoring the warning from Pyongyang, however offending it may be,” it said.

“Instead of using the term missiles, the North said a tactical guided weapon, indicating that it is paying attention to the international sanctions,” said Prof. Kim Dong-yub of the Kyungnam University’s Institute for Far Eastern Studies. “It hints at the intention to not hamper the talks with the United States.”

Observers said Kim was blaming the Moon administration because Kim’s promises to resume operation of the Kaesong Industrial Complex and Mount Kumgang tour program in his New Year’s speech were not fulfilled.

Pyongyang’s attempt to drive a wedge between Washington and Seoul may be working. The United States did not react very much to the North’s missile tests on Thursday, while the South was shaken.

In an interview with Fox News on Thursday, U.S. President Donald Trump downplayed the North’s provocations and insisted that he gets along “very well” with Kim. “They haven’t done nuclear testing, Trump said. “They really haven’t tested missiles other than you know smaller ones, which is something that lots test.”

U.S. Secretary of State Mike Pompeo downplayed the signification of the tests as Pyongyang and Washington try to arrange denuclearization talks. “Everybody tries to get ready for negotiations and create leverage, and create risk for the other side,” Pompeo said in an interview with Bloomberg TV.

The United States earlier said the denuclearization dialogue with the North would start this month, but the North linked it last week with the upcoming military drills.

The U.S. response was softer than the South’s. The National Security Council of the Blue House on Thursday evening said the North fired “a new type of short-range ballistic missile.”

The statement was different from Seoul’s stance in May, when it deliberately postponed its own conclusion of what Pyongyang had fired. This time, the National Security Council expressed strong concern about such actions.