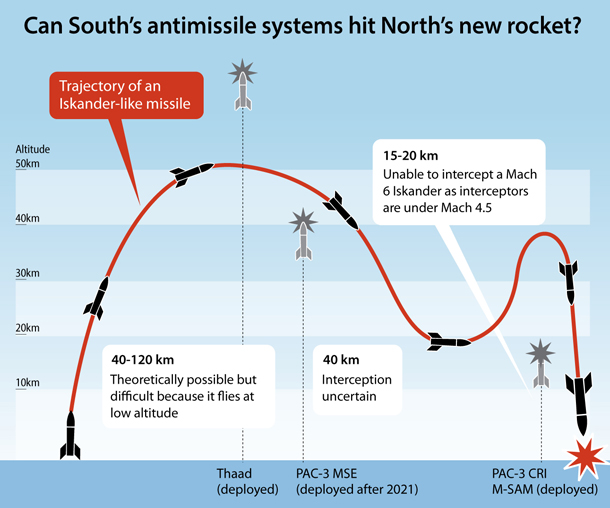 Pyongyang’s development of the Iskander-like missiles is seen as a threat to the South’s current antimissile system. The military also failed in its initial tracking of the missiles, indicating its lack of detection abilities.

On Thursday, the JCS announced that the first missile flew 430 kilometers (267 miles) and the second 690 kilometers at a maximum altitude of 50 kilometers. After further assessments by South and U.S. military authorities, the JCS made a correction on Friday, announcing that both missiles flew about 600 kilometers.

“They did not follow the trajectory of ordinary ballistic missiles,” said the JCS official. “They performed a pull-up maneuver in the dive phase, so we had to change the flight distances from our initial assessments.”

When the North conducted missile tests in May, experts warned that Pyongyang was developing an Iskander-like system, but South and U.S. authorities deferred their conclusion. Friday’s announcement was the first confirmation that the North has developed new short-range ballistic missiles similar to the Russian system.

The Iskander is a solid-fuel missile that uses a mobile launcher, significantly reducing launch preparation time. Iskander missiles can fly a depressed trajectory and make evasive maneuvers during the terminal phase to prevent interception and are also capable of carrying nuclear warheads.

“The Patriot missiles currently deployed are capable of responding to the North’s new missiles,” said an official of the Ministry of National Defense. “We will further improve our antimissile capabilities accordingly.”

North Korean media said Friday that leader Kim Jong-un expressed his satisfaction toward the development. He said their “low-altitude gliding and leaping flight” would make the new system “hard to intercept.”

“The features are to avoid enemy radars and interceptors,” Kwon Yong-soo, a missiles expert and former professor at Korea National Defense University, told the JoongAng Ilbo. “They are the best-known features of the Russian Iskander.”

Dismissing concerns that the military had failed to properly track down the North’s missiles, the JCS insisted Korea has resources capable of detecting almost all projectiles that the North fires toward the South. “The North fired toward the East Sea on Thursday, so they went off our detection range,” a JCS official said.

“We were already following the movement of the North’s mobile launchers,” he also said. “On Thursday, we didn’t use all our assets to detect the missiles.”

“These two short-range ballistic missiles were not a threat directed at the Republic of Korea or the U.S. and have no impact on our defense posture,” it added.

While the North fired the missiles from Wonsan on Thursday, their 600-kilometer range covers the entirety of South Korea, including Jeju, and some parts of Japan, where U.S. forces operate bases, if fired near the inter-Korean border.

The U.S. Marine Corps’ Air Station in Iwakuni and the Sasebo naval base, where the F-35B-carrying amphibious assault ship USS America is stationed, are both within range of the North’s new missiles.