LEE DONG-HYEON
The author is a deputy industry 1 team editor for the JoongAng Ilbo.

July 20 was the 50th anniversary of the moon landing. Celebrations were held across the United States, and NASA commemorated the landmark with various events. What caught my eye were events sponsored by companies. Companies that were involved in Apollo 11’s moon landing in 1969 celebrated the day in their own ways. Swiss watchmaker Omega, which heavily used the moon landing in its marketing, created a video and released a commemorative watch. The Omega Speedmaster Chronograph model, known as the Moonwatch, is famous as the astronauts on Apollo 11 wore it to the Moon. 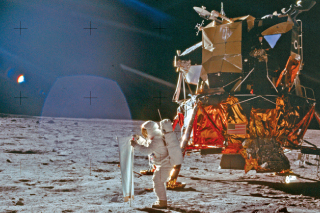 Apollo 11 astronaut Buzz Aldrin works on a solar wind experiment on the surface of the moon on July 20, 1969. [AP/YONHAP]

American chemical company DuPont released a global press release boasting that 20 of the 21 layers of the space suit were made with materials invented by the company. The first material to touch the lunar surface and the flag placed on the moon were developed by DuPont. German optical manufacturer Carl Zeiss and Swedish camera maker Hasselblad also joined in. The photo of Neil Armstrong’s footprint and the American flag on the moon were taken by a Hasselblad camera with a Carl Zeiss lens.

Watching the proud promotions of the companies involved in the moon landing, I thought about their survival and innovation. Omega still makes luxury watches, and Carl Zeiss has been the best optical manufacturer for more than 160 years. Hasselblad has been acquired by Chinese drone maker DJI, but it still makes quality products.

Korea’s lunar exploration project for next year is struggling, and companies are affected by Japan’s trade retaliation. The secret to survival for companies is technological dominance over competitors and investments in basic science.