LG pulls out the stops to make it a 5G summer

LG pulls out the stops to make it a 5G summer 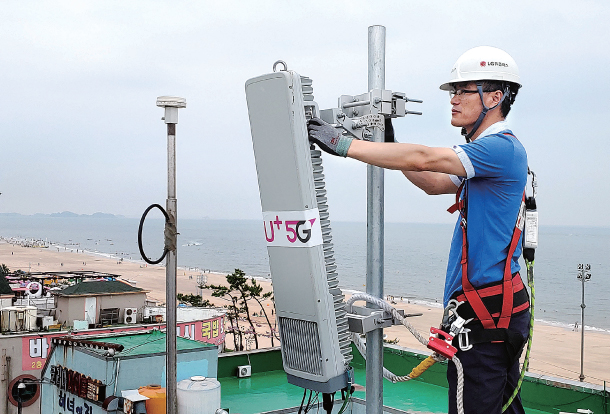 An LG U+ staffer compares download speeds of 5G and 4G LTE phones at 5G base station near Daecheon Beach, South Chungcheong, on Thursday. [LG U+]

When the Korea JoongAng Daily visited Daecheon Beach in South Chungcheong with a group of reporters Thursday, LG U+ employees were busy checking 5G base stations and repeaters set up near the beach.

The beach, famous for its mud festival, was not jammed with vacationers because of the rains. But LG U+ said it completed setting up 22 5G signal repeaters and two base stations to cover the beach area on Wednesday to be ready for a holiday crowd.

The repeaters were placed 300 meters (984 feet) to 400 meters apart from one another. Each base station is connected to some 10 to 12 repeaters to manage signals. LG U+ employees are now optimizing the network infrastructure to offer quality 5G service, the company said. 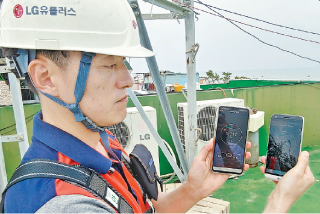 An LG U+ staffer checks a 5G repeater set up at Daecheon Beach, South Chungcheong, on Thursday. [LG U+]

In its current state, a 5G phone user can enjoy a maximum 1 gigabit per second data download speed near the beach, according to Kim Baek-jae, leader of LG U+ Daejeon Infra Team, although Kim said the actual speed customers experience might be much slower considering many users need to share the 5G network, and they will be moving around rather than standing still near 5G antennas.

“Customers moving around the beach will likely get around 400 megabits to 600 megabits per second download speeds,” Kim said.

When an LG U+ staffer demonstrated real-time 5G speeds near the beach on Thursday, the download speed actually fell from 1 gigabit per second to around 700 megabits as soon as one reporter started testing the 5G speed.

But customers won’t have good access to 5G inside buildings like hotels. As 5G runs on a higher frequency range than 4G LTE, it is more difficult for 5G signals to penetrate insulated construction materials. The carrier said it will add more infrastructure to gradually enable 5G connections inside buildings.

LG U+ said it has been preparing to expand 5G coverage to major vacation spots like beaches and golf courses as well as expressways and KTX railways from May. These key areas will be connected to 5G network by November, it said.

“By the end of this month our 5G service will be able to cover some 40 beaches nationwide, and by next month, some 50 beaches will be covered,” LG U+ said in statement. Beaches already offering 5G include Gyeongpo Beach, Sokcho Beach and Haeundae Beach.

In the winter season, the carrier is planning to install 5G at major ski resorts and mountains.

In South and North Chungcheong, LG U+ said it is planning to deploy over 7,000 5G signal repeaters by the end of this year. So far it has accomplished roughly half of that plan. While LG U+ has courted controversy for using Huawei’s network equipment in its 5G infrastructure, Kim from LG U+ said all of 5G network equipment used in the Chungcheong area is from Samsung Electronics except for some areas where Ericsson network equipment has been set up.

In greater Seoul, as well as 85 major cities nationwide, the carrier is planning to deploy 80,000 5G repeaters and base stations by the end of this year.