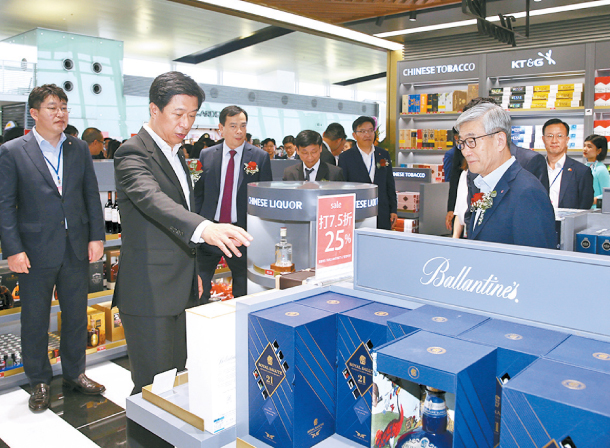 Lotte Duty Free has opened a store in Vietnam’s Noi Bai International Airport in Hanoi, the country’s capital and the second largest city.

In departure Terminal 2, the 506-square-meter (5,447 square feet) store is Lotte’s third outlet in Vietnam, following those in the Danang International Airport and Cam Ranh International Airport, Nha Trang. Both existing stores have generated positive sales results, and were profitable in their first year of operation.

Apart from Lotte, Vietnam’s Nia and Nasco, and Japan’s Jalux are also running duty free stores at the terminal or Terminal 2.

Lotte’s new branch will sell more than 90 brands, 21 of which are exclusive to the store and not found elsewhere in the airport.

They include Yves Saint Laurent, Tom Ford and Bobby Brown. Korean brands The History of Whoo, SU:UM and Innisfree will also be sold.

Lotte will be operating the new duty free operation through 2028.

The company expects it to generate revenues of “200 billion won ($169 million) in the next decade.”

“We will expand investment in various ways to find a way through which Vietnam’s tourism industry and Lotte Duty Free can grow together,” said Lee Kap, Lotte Duty Free CEO during an opening ceremony held in Hanoi last Friday.

Having started service in late 2014, the terminal itself has maximum annual capacity of 15 million and has seen visitor numbers increase every year, Lotte said.

The rise of Chinese travelers in Hanoi was a particularly significant trend last year, with total numbers up 20 percent. Koreans followed, at 12 percent, and French came third, at 10 percent.

According to Hanoi’s tourism office, 15 percent of the city’s gross domestic product (GDP) comes directly from tourism or related businesses.

Last year, the number of foreign tourists to the city reached 5.74 million, a 16 percent increase on year.

Hanoi expects the number of tourists from overseas to reach 7 million this year.

Lotte was the first Korean company to expand its duty free store overseas, in 2012, and has been growing fast since then.

The first overseas Lotte duty free store was opened in June 2013 in Jakarta, Indonesia. Lotte now has duty free stores in Guam as well as in Japan, Thailand, Australia and New Zealand.

Some of its overseas duty free shops have become especially lucrative.

Lotte’s duty free store in Ginza, Tokyo, has been enjoying an annual sales growth of 120 percent.

According to Moodie Davitt, a London-based report publisher focused on the duty-free market, Lotte ranked as the second largest in the sector after Dufry.

“The plan is to reach 1 trillion won in annual revenue from our overseas business by 2020,” the company said.

The company is planning to open another store in Vietnam, its fourth in the country, later this year. It will be in Danang.