YEOJU, Gyeonggi - It’s not an exaggeration to describe the recent trend for sport-utility vehicles (SUVs) dominating Korea’s auto market as an obsession.

Kia Motors’ Seltos is the newest addition to the market’s shift in preference toward a bigger boot and a raised view of the road, similar to Hyundai Motor’s Venue and SsangYong Motor’s refreshed Tivoli.

The Korea JoongAng Daily took the Seltos for a spin on a 65-kilometer (40-mile) course around Gyeonggi on July 18, where the vehicle delivered a comfortable ride and made a compelling argument to those looking for an affordable midsize SUV despite its compact label.

On first impression, the Seltos is a surprisingly big car for its segment. 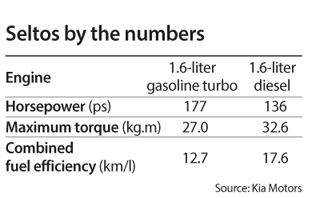 Its price tag is also on the heftier side, starting at around 1 million won ($844) more than Hyundai Motor’s comparable compact Kona SUV.

The automaker argues that the Seltos is a premium compact offering, loading it with a heads-up display, a 10.25-inch navigation display and the auto group’s signature smart-safety features including lane-following assist, which automatically adjusts the vehicle’s speed and direction to the surrounding environment, and driver attention warning as standard.

The safety features gently inspire confidence in driving, automatically making adjustments when required. The vehicle also alerted the driver to move when a car in front took off after being at rest, convenient for those who get distracted easily.

The amenities add to the Seltos’s respectable driving experience.

Its 1.6-liter turbocharged engine produces up to 177 horsepower and 27 kilogram-meter (195.3 pound-foot) in torque, and the vehicle zips to high speeds, considering its size and segment, although it lacked a bit of power on inclines.

The vehicle’s steering handled itself fine during a winding stretch, responding accurately to the turn of the steering wheel.

Despite the decent performance and adequate amenities, the Seltos is a head scratcher for auto buyers who are single, the traditional target base for compact SUVs.

Hyundai Motor’s Kona is similar in terms of performance with the same engine at a lower price, while SsangYong Motor’s Tivoli has an even lower price, albeit equipped with a rough and basic interior.

The Seltos will likely appeal to family drivers looking for an affordable midsize SUV, willing to make some compromise in size. Considering its similar size to the Sportage and a 498-liter (17.6 cubic-foot) trunk space, the Seltos can comfortably carry a four-person family. It’s also 2 million won cheaper than the Sportage.

Whether there is a large target audience for such specific preferences in the domestic market is debatable.

The automaker said it aims to sell 110,000 Seltos in the Indian market by the end of the year.

The overseas strategy also drives the automaker’s focus toward SUVs with increasing demand for the vehicles.

According to Kia’s second quarter earnings report, it recorded robust sales of the large-size Telluride and Soul compact SUV in the United States, leading to a 52-percent rise in net profit from the year earlier.

The Seltos brings Kia’s list of SUVs and crossovers sold in the domestic market to seven. Add the Telluride sold in the United States and the automaker seems to have shifted gears to specialize in SUVs.

While the Seltos faces fierce competition in the domestic market with cheaper offerings like the Tivoli and Kona, it will likely fare better in overseas markets such as India, the fourth-largest auto market in the world, which has a growing appetite for feature-packed yet affordable offerings.

The gasoline-model Seltos starts at 19.29 million won, with the highest trim starting at 24.44 million won.