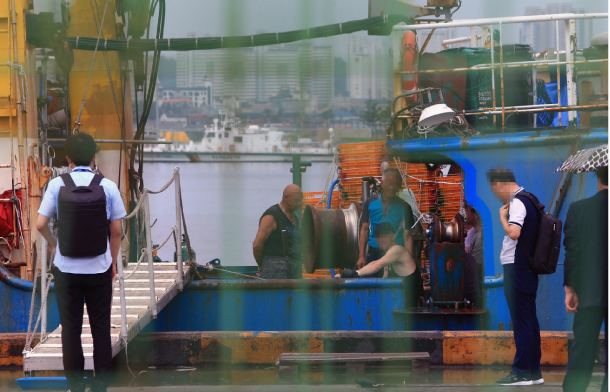 South Korean and Russian fishermen arrive at Sokcho Port in Gangwon on Sunday after being released by North Korean authorities earlier that day. The fishermen were detained in the North Korean coastal city of Wonsan in Kangwon Province from July 17 after their vessel drifted into North Korean waters. [YONHAP]

Two South Koreans who were detained after their fishing vessel drifted into North Korean waters earlier this month due to an engine malfunction safely returned to the South on Sunday afternoon.

The Ministry of Unification announced Sunday that the South Korean sailors arrived at Sokcho Port in Gangwon at around 1:20 p.m. Sunday after departing from Wonsan Port in North Korea’s southeastern Kangwon Province at 7 p.m. Saturday.

The fishermen were said to have arrived on the Russian-flagged Xiang Hai Lin 8, the same 300-ton vessel they were on when North Korean authorities nabbed them in the East Sea on July 17. The ship had 15 other sailors on board, all Russian, when it was caught by the North. The Unification Ministry said the Russians arrived in Sokcho Port on Sunday as well.

The ministry, which handles relations with Pyongyang, said in a statement that it was “positive” about Pyongyang’s gesture to send the sailors and vessel safely back to South Korea on “humanitarian grounds.”

The 17 South Korean and Russian fishermen departed from Sokcho Port on July 16 destined for Russia’s Far East to catch red snow crabs, when their vessel drifted in the East Sea due to a mechanical problem with its engine, according to Seoul.

At one point, it passed the inter-Korean maritime border to enter North Korean waters, and on July 17, was taken to Wonsan, though exactly how is not known.

The Unification Ministry said the South Korean fishermen were two men in their 50s or 60s, who were on the vessel to supervise the Russian sailors and help with fishing techniques. Pyongyang’s decision to release the South Korean sailors safely came as a relief for many government officials who feared the regime may try to hold them longer.

Unification Ministry officials said last week that the North was not responding to the South’s call for more details about the detention. Pyongyang, however, responded to calls from Moscow, the ministry said.

The Russian Embassy in North Korea said in a statement last Thursday that its staff in the consular department met with held members of the vessel’s crew and that the Russian sailors’ health was good, without explaining how the South Korean sailors were.

The Unification Ministry said they heard from Russia that the fishermen were being investigated in “a safe location” and lodging at a place provided by the North.