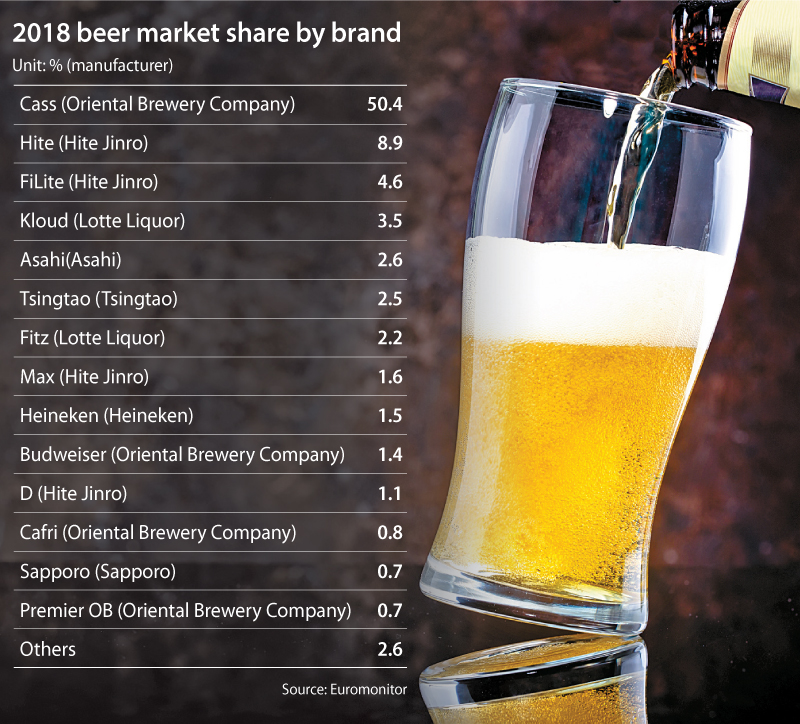 When Oriental Brewery Company (OBC) announced it would temporarily reduce the price of Cass beer and Filgood low-malt beer, from July 23 to the end of August, wholesalers were suspicious.

The response? A boycott.

“We have expressed our regret on the sudden price cutting. We decided to protest the dumping of stock on us,” said an official from the Kglwa.

The organization decided to reject the company’s access to the computers of wholesalers, requests for data and the return of empty beer bottles.

Wholesalers have real-world concerns. They say if the company lowers the price, it is hard for them to sell the beer already in inventory they brought in at a higher price.

“The vast majority of wholesalers have the stock of Cass purchased at 1,203 won,” said the official.

This is why liquor wholesalers request OBC to provide beer at the original price. Their warehouses are teeming with bottles purchased at the earlier, higher rate.

The wholesalers point out that OBC is cutting prices in order to keep rival Terra from growing too rapidly and taking market share.

Immediately before a markup, wholesalers tend to panic buy products. According to the industry, the Cass buying-spree took place when the company lowered the price, and it influenced the entry of Terra.

Terra, introduced on March 21, has done well in the entertainment and home markets, and No. 1 selling Cass is well aware of the threat. Within 40 days of its release, one million boxes of Terra were sold. Within 100 days, 100 million bottles were moved.

“If the market share between Cass and Hite was seven to three in the past, the ratio has now changed to six to four,” said a liquor wholesaler who requested for anonymity. He added that as time goes by, Terra is making a progress at a fast pace.

Hite Jinro recently said that the goal of selling 16 million boxes this year could be achieved.

Euromonitor last year concluded that the size of Korean beer market was as large as 1.96 billion liters (517.8 million gallons). According to Euromonitor, the market share of Cass was 46 percent and Hite 17 percent in 2017.

The manufacturer of Cass says the wholesalers are being absurd.

An official from OBC said liquor wholesalers are opposing the price cutting since they can get more profit when the store price is higher.

“The panic-buying is what wholesalers chose to do, and we never forced them to do it.”

Amid this fight between the two parties, many say that the consumer, the most important player in the market, is left out as the reduced price does not directly feed into the store price.

When the company raised the store price of Cass by 46 won in April, the wholesale price to stores rose 100 to 200 won.

The owners of restaurants have to increase the price, but not many did so. Although the company is providing Cass to liquor wholesalers at a reduced price, it is highly unlikely that the reduced price is applied to the consumer price right away.

Self-employed businesspeople cannot boldly change the selling price for fear that their business might shrink. In reality, most of the restaurants and liquor stores in Seochon-dong, Jongno District, in central Seoul have been maintaining the price that was set early this year.

“The number of restaurants that raised the price of liquor this year was only five or six out of 90 eateries,” said Ko Young-suk, who has been running a meat restaurant in Seochon for 50 years. The most popular store in the area has the soju and beer at the same price as before.

Ko said that it is hard to raise the beer price by 100 won to 200 won when the store price increases only a little.