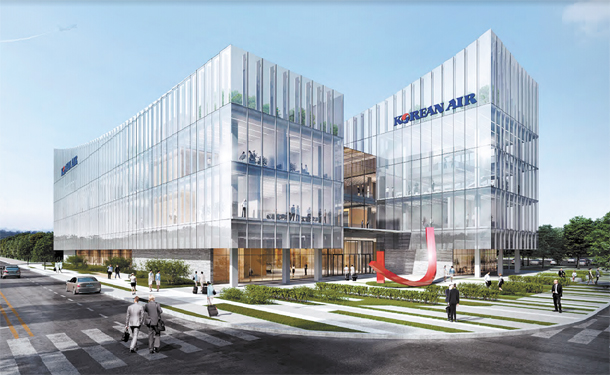 A 3-D image of Korean Air’s Incheon Operation Center to be built near Terminal 2 of Incheon International Airport. [KOREAN AIR]

Korean Air is building a new briefing center for its cabin crew and pilots near Terminal 2 at Incheon International Airport, spending roughly 36 billion won ($30.4 million) on the project, the company said Monday.

It said the new structure is intended to increase efficiency of flight briefings and cut travel time from the briefing to the terminals.

While Korean Air moved its operations to Terminal 2 when the new terminal was opened last year, the airline’s pilots and cabin crew were briefed at a small rented briefing space in Terminal 2 or at its existing operation center near Terminal 1.

A Korean Air spokesperson said the briefing room at Terminal 2 was used by cabin crews serving early morning flights, but the space was too small. The existing center near Terminal 1 was too far, causing inconvenience, as it took roughly 20 minutes to travel from the center to Terminal 2.

The airline’s new Incheon Operation Center will be built on a 7,230-square-meter (77,823-square-feet) plot of land near Terminal 2. The building will have a basement floor as well as three floors above ground, with total floor area of 14,834-square-meters.

It will only take about five minutes by shuttle bus from the center to Terminal 2, the airline said in statement.

To build the center, Korean Air needs to obtain construction approval from relevant authorities by June next year it said. Then, it will start building the center from September, with the opening scheduled for April 2022.