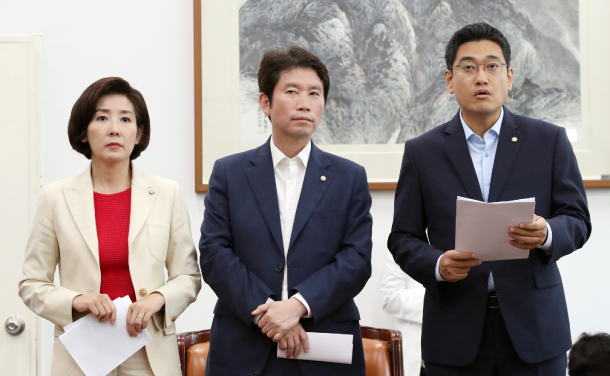 Floor leaders of three major parties announce Monday that a plenary session of the National Assembly will be held on Thursday to address the economic crisis. [LIM HYUN-DONG]

President Moon Jae-in canceled a summer vacation this week to deal with the diplomatic-economic row with Japan.

Moon canceled the summer vacation, planned for Monday through Friday, to work at the Blue House as usual. “The president said his decision should not affect staffers’ vacation plans,” Yoo Song-hwa, head of the Blue House press center, said Sunday.

It is the first time Moon canceled his summer vacation since he took office in May 2017.

But Moon’s routine meeting with senior secretaries on Monday did not take place.

While the Blue House did not formally announce a reason for the cancellation, aides conceded that Japan’s economic retaliations were behind it. “Japan issues, such as Tokyo’s imminent announcement of the removal of Korea off from a so-called ‘white list’ of trading partners, are the main reason,” a presidential aide told the JoongAng Ilbo.

Speculation is running high that Japan will remove Korea from its so-called “white list” of countries given preferential treatment in export procedures after Japanese Prime Minister Shinzo Abe returns from his own summer vacation today.

Abe will hold a cabinet meeting on Friday, and the decision will likely be approved at that meeting, Japanese media including the Yomiuri Shimbun have reported.

Japan put export controls on three materials crucial for semiconductor and display manufacturing on July 4. The move was an apparent economic retaliation for the Moon administration’s refusal to get involved in Korean Supreme Court’s rulings that Japanese companies must pay compensation to Korean victims of wartime forced labor. The Blue House says it cannot influence the judicial process.

Although Seoul proposed that companies from Japan and Korea voluntarily create a fund to compensate victims of Japan’s wartime forced labor, Abe flatly rejected the plan in June. He also refused to have a summit with Moon when Japan hosted a Group of 20 summit in June.

Moon is also facing some sensitive security issues, and a Blue House official said they all affected the president’s decision to cancel his vacation. Last week, North Korea tested a new type of short-range ballistic missile, and labeled the tests a warning to Moon to stop an upcoming joint military exercise with the United States and the purchase of advanced weapons.

Prime Minister Lee Nak-yon also canceled his summer vacation, scheduled from Aug. 8 to 14. “After he returned from a four-nation tour, Lee told staffers on July 23 that he would cancel his vacation,” an aide to Lee said. “He made the decision taking into account the sensitive period in Korea-Japan relations. He will likely continue his efforts to contact Japan.”

That is a follow-up to an agreement reached on July 18 when Moon met leaders of the five parties at the Blue House. The ruling and opposition parties also agreed to resume normal legislative operations to address the economic crisis.

The supplementary budget bill will be voted on and resolutions to condemn Japan, Russia and China will be passed on Thursday. Lawmakers will also hold hearings to grill the government about the current situations.

The ruling party also decided to create an in-house special committee on advancement of component and materials, after Japan threatened to remove Korea from its white list. DP Chairman Lee Hae-chan said Monday that the party and administration will put their best efforts into localizing components and materials, repeating Moon’s earlier promise.

Lee also canceled his summer vacation. “Lee was to visit China and Russia for a week starting Aug. 5, but he canceled the plan,” said a DP official.

As Seoul is bracing for an industrial supply crisis, a conservative Japanese newspaper reported Monday that Tokyo has decided to not hold a Korea-Japan summit unless the Korean government changes its approach to the forced labor issue.

“The Japanese government decided to not hold a summit with President Moon unless Korea shows a constructive response toward the forced labor issue,” the Sankei Shimbun reported. “Even if Moon attends international summits such as the UN [United Nations] General Assembly in New York in September, Tokyo will not create an opportunity for a direct dialogue if the current situation remains unchanged.”

The newspaper said Abe maintains the position that the ball is in Korea’s court and expects a new response from Seoul on the forced labor issue.

According to the newspaper, Moon and Abe are expected to attend a series of international meetings together in the coming months. In addition to the UN General Assembly in late September, they are scheduled to attend Asean-related summits at the end of October through early November in Thailand. They are also expected to attend the Asia-Pacific Economic Cooperation (APEC) summit in Chile in mid-November.

A Korea-Japan-China trilateral summit in China is also supposed to take place before the end of this year, but the newspaper said the scheduling has made no progress due to the fraying of Korea-Japan relations, quoting a Japanese Foreign Ministry source.

The conservative newspaper, often regarded as pro-Abe administration, went further on the issue. “I hope the Korean government makes a political decision by issuing a statement that it respects the Supreme Court ruling but the compensation issue was resolved by the 1965 bilateral claims settlement agreement,” a senior Foreign Ministry official of Tokyo was quoted as saying.

Abe’s stance, that there will be no summit with Moon until the forced labor issue is resolved, is similar to that of Korea’s approach when it pressured Japan to settle the comfort women issue.

After she took office in 2013, President Park Geun-hye said resolving issues concerning Japan’s wartime sexual slavery of Korean women was a precondition for a Korea-Japan summit, and Abe fiercely criticized the diplomatic tactic. The two leaders finally met in November 2015, and a bilateral deal to settle the comfort women issue was signed the next month. The agreement, however, was scrapped by Moon.

Meanwhile, Moon and his family, including his wife and a grandson, took a private trip to Jeju on Saturday and Sunday, the Blue House said. “He used the weekend to meet with a close friend,” a presidential aide said. “He did not use a vacation day.”

Moon reportedly stayed at the house of Father Song Gi-in, a democracy activist and founding member of the Catholic Priests’ Association for Justice. Song was reportedly the spiritual mentor of Moon and the late President Roh Moo-hyun. When Moon had his first presidential summer vacation in 2017, he had a meeting with Song.