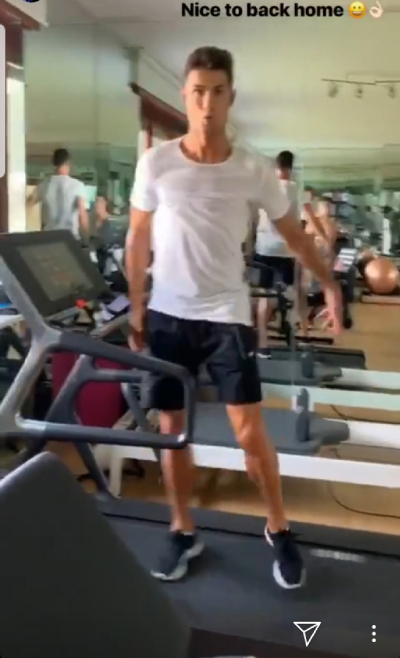 A photo of Cristiano Ronaldo working out at a gym was posted on his Instagram on Saturday. [YONHAP]

Thousands of Korean fans are clamoring to sue a local event organizer after football star Cristiano Ronaldo failed to take to the pitch at an exhibition match Friday between Italian football club Juventus and the K League All-Stars.

Despite Juventus’s agreement to field Ronaldo for a minimum of 45 minutes, the Portuguese football star was benched throughout the entire match, leaving some 63,000 fans at Seoul World Cup Stadium disappointed.

Many of those fans are now preparing to file a class action law suit against TheFasta, the agency responsible for the event with Juventus, demanding that they receive reimbursement for the high priced tickets they purchased to watch the game.

A local law firm, MyungAn, based in Suwon, Gyeonggi, began gathering potential plaintiffs online on Saturday in preparation for a lawsuit against TheFasta, to which around 2,300 people who watched the match have already reportedly sought interest.

A blog post uploaded by the firm read that TheFasta “actively promoted the sale of high-priced tickets based off the information that Ronaldo would play for over 45 minutes.”

It continued, “but since the main content of this promise was unfulfilled, ticket purchasers can demand the seller, TheFasta, to compensate for a significant portion of the ticket cost due to damages arising from a breach of contract.”

OhKims Law & Company, another local law firm, is also preparing a damages lawsuit against TheFasta, and is looking into suing TheFasta CEO Robin Jang for fraud, according to a press release from the law firm.

In an interview with a local broadcaster, Robin Jang claimed the fault was on Juventus for breaching their contract. Jang told SBS that she heard that Ronaldo would not be playing in the match 10 minutes into its second-half, and that there was little her company could do to force the player to join the game in spite of the contract. The only sanctions provision in the contract was that Juventus would have to pay several hundred million won, she said.

According to legal analysts, given that Ronaldo’s stardom played a key role in many fans’ decisions to purchase tickets for the match, a lawsuit could likely result in some form of compensation for damages.

Separately, the K League said it would seek financial compensation from TheFasta, after issuing an apology to its fans for Ronaldo’s no-show on the pitch.

Juventus manager Maurizio Sarri said at a postmatch press conference that he did not play Ronaldo because of a muscle problem, and refused to answer any further questions about the player.

The match, which was scheduled to kick off at 8 p.m. Friday, was delayed for 50 minutes after the flight Juventus players were traveling on from Nanjing, China, was delayed. In a friendly match there, Ronaldo played the full 90 minutes.

Jang blamed Juventus for reassuring her that Ronaldo would be able to play in Korea in spite of the team’s hectic schedule, and that no prior notice was provided in regard to his benching for the match.

Adding to fans’ ire was the insensitivity shown by Ronaldo in a social media post he put up upon his return to Italy. Uploading a video of himself, ostensibly unstrained, on a treadmill, he wrote, “Nice to be back home.”

The incident and his response have effectively besmirched the star’s reputation in Korea, where fans had previously called him endearingly “our brother.” After his social media post spread among Korean fans, many now refer to him by a Korean portmanteau that combines his name with “thief.”