By winning another major tournament on Sunday, the Evian Championship in France, Ko Jin-young reclaimed the No. 1 spot in the Rolex Women’s World Golf Rankings. 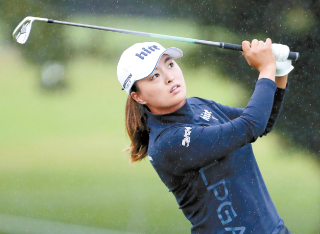 Ko Jin-young watches her shot during the final round of the Evian Championship at Evian Resort Golf Club in France on Sunday. [AP/YONHAP]

Ko picked up her third win of the season by finishing the tournament at 15 under par, 269, two shots ahead of the runners-up. With the win, Ko became the first player on the LPGA Tour to pick up three wins this season. This was also her second major title of her LPGA career.

The victory at the Evian Championship allowed her to achieve more than just another win to add to her already impressive resume. According to the latest world ranking announced on Monday, Ko received 8.93 average points to be the new No. 1 golfer, 0.43 points ahead of No. 2 Park Sung-hyun. This is the second time that Ko reached the top spot in the world ranking.

Right behind Ko, Park moved down a spot to second while Lexi Thompson of the United States and Minjee Lee of Australia stayed the same at third and fourth, respectively.

Ko is having a dominant sophomore season on the LPGA Tour this year. Before the Evian Championship, Ko picked up her first win of the season in March at the Bank of Hope Founders Cup in Phoenix. Then, she continued her success by winning the ANA Inspiration in April, the LPGA Tour’s first major tournament of the season.

In the 15 tournaments she competed in this season, Ko had nine top-15 finishes.

In addition to number of wins, Ko is also ranked first on the LPGA Tour’s scoring average, at 69.109, Rolex Player of the Year, at 189 points, official money ranking and on the Race to CME Globe, at 3,199, this season.

Ko has now won five tournaments on the LPGA Tour in just her first two seasons.

As the new world No. 1, Ko will be competing at the AIG Women’s British Open, starting from Thursday, at Woburn Golf Club in England. This is the fifth major tournament of the season.

Once again, Ko enters the tournament as a favorite to win, and if she does take the title, she will have won three out of five major tournaments this season.