Korean gymnasts aim to vault their way to gold

Korean gymnasts aim to vault their way to gold 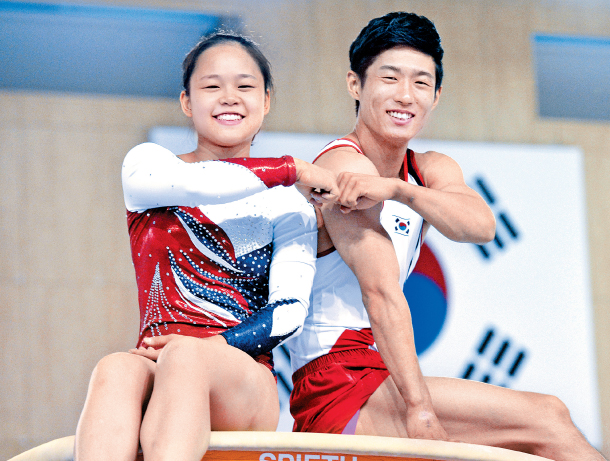 Yeo Seo-jeong, left, and Yang Hak-seon pose for a photo at the Jincheon National Training Center in North Chungcheong on July 10. [KIM SUNG-TAE]

At the 2020 Tokyo Olympics, which is less than a year away, Korea is hoping to medal in vault, a discipline with a short history in Korea, with help from Yang Hak-seon and Yeo Seo-jeong.

Their successful careers have set high expectations for Korean gymnasts, who hope to make history again at the upcoming Olympics.

Yang is a historic figure in Korean gymnastics, as he won Korea’s first-ever gold in the sport, in men’s vault, at the 2012 London Olympics. Despite his achievement, Yang quickly left the spotlight after suffering numerous injuries.

Yang settled for silver at the 2014 Incheon Asian Games, during which he was dealing with a right thigh injury. He hoped to repeat his success at the 2016 Rio Olympics but wasn’t able to do so after undergoing surgery on his right Achilles’ tendon.

“When I perform, I normally turn to my left side, so the balance of my body is shifted to my left,” Yang said. “I think I injured the right side of my body more because I’m putting more weight on to balance my body. Two years ago, rehabilitation was so difficult that I even thought about quitting.”

“Since I was just hurt for years, people around me started to think that I wasn’t really hurt,” Yang said. “I didn’t want to end [my career] like that.”

He made his return to the sport by winning gold at the National Sports Festival last year. He then continued his stride by winning the International Gymnastics Federation (FIG) World Cup 2019 in Baku, Azerbaijan, and in Doha, Qatar, over two straight weeks in March.

Throughout all his struggles, Yeo noticed Yang’s determination to bounce back.

“Since I haven’t really suffered from any major injuries, I didn’t really know how he felt,” Yeo said. “He didn’t show any of those [emotions] in the gym. If I kept on getting injured like him, I probably would have given up a long time ago and looked for something else to do. It’s amazing how he fought through it and came back.”

Yang said the time he missed from injuries allowed him to become more mature and he shares his experience with other gymnasts.

“Once you get injured, you start to get desperate because you think everything’s over,” Yang said. “Since I’m well aware of that emotion, I try hard to listen [to their concerns].”

While Yang missed out on action for years trying to rehabilitate, Yeo quickly burst on the scene as a hopeful in women’s gymnastics.

Although Yeo has never competed at the Olympics, she is already a notable name in the sport. At 16, she won gold at the 2018 Asian Games in Jakarta.

During the Korea Cup in Jeju in June, Yeo successfully performed a new skill named after herself. With a difficulty score of 6.2, the new vault includes a forward handspring and a salto forward with a 720-degree twist at the end. Yeo’s new skill is a mix of her father, Yeo Hong-chul’s skills “Yeo1” and “Yeo2.” Yeo’s father was also a dominant gymnast who won a silver medal in men’s vault at the 1996 Olympics in Atlanta.

After successfully performing her vault at the Korea Cup, Yeo’s vault was recognized by the FIG and was listed in the FIG Code of Points.

Behind her success, Yeo credited Yang’s advice. Just like Yeo and her father, Yang, too, got his skill recognized by FIG and it is named after him, “Yang Hak-seon1.”

“I watched Hak-seon and tried to do the same,” Yeo said.

While Yang’s biggest enemy is injuries, Yeo’s challenge will be pressure. In addition to her achievements, Yeo is receiving a lot more attention from her father.

“I had a lot of pressure at the Asian Games last year,” Yeo said. “For the Olympics next year, I’ll have to overcome the pressure so I can win the Olympic gold that my dad didn’t win. [After I win,] I’m going to hang that gold medal around my dad’s neck.”