[ZOOM KOREA] Using color to bring the world together

[ZOOM KOREA] Using color to bring the world together 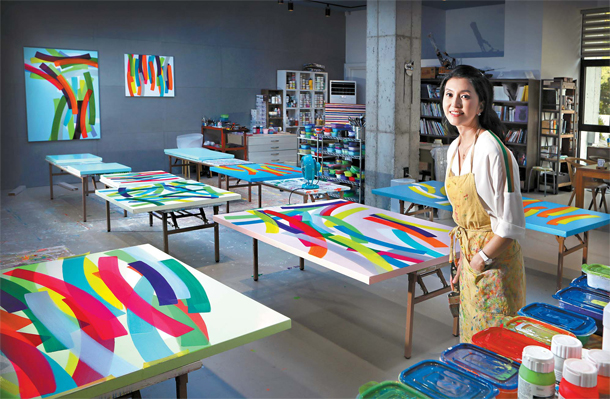 Communication is an act of exchanging words and ideas for most people, but Korean artist Ha Tae-im begs to differ.

“I don’t think communication needs only words. I believe you can achieve true communication with colors, too,” said Ha who is known as a color band artist. The 46-year-old painter draws bands of colors in curved shapes on canvas.

The Korea JoongAng Daily recently caught up with Ha, who is dreaming about making her own grand art piece with her signature color bands in Yangpyeong, Gyeonggi, where her studio is located.

In the front yard of her studio, a structure titled “The Tower of Peace” stands under a thick, leafy gingko tree. The tower was installed at Panmunjom in the joint security area of the demilitarized zone (DMZ) to celebrate the first anniversary of the meeting between leaders of the two Koreas. The historic inter-Korean meeting took place on April 27, 2018, where the armed forces of both countries stand face-to-face.

Each blue and red band from the tower represents the South and the North, while the other color bands symbolize countries such as the United States, Japan and China.

Ha said she worked on the structure in hopes of achieving peace on the Korean Peninsula.

Ha’s spacious workplace is filled with works in progress. Watercolors and paint brushes of different sizes neatly hang on one wall, while the other walls are filled with bookshelves.

As soon as she sat down for the interview, the artist began to talk about her childhood. 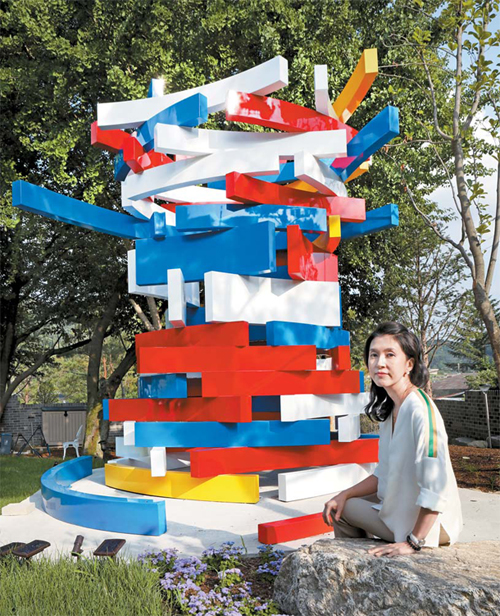 Ha Tae-im poses in front of her structure titled “The Tower of Peace.” The tower was installed at Panmunjom in the joint security area of the demilitarized zone in April to commemorate the first anniversary of the meeting between the two leaders of South and North Korea. [PARK SANG-MOON]

The artist was born to abstract painter Ha In-doo (1930-1989) and traditional painter Ryu Min-ja, 77, as one of their three children.

Ha and her siblings grew up playing with clay and paper. Art ran in her blood and she was adored by her father for that reason. Her father used to tell her, “You are bound to be an artist.”

Ha’s father dreamed of studying art in Paris with his daughter one day. But he was put behind bars for not reporting on his childhood friends, who were wanted for being spies.

Even after being released from prison, Ha’s father was deprived of the right to vote and lived in isolation for the rest of his life.

Instead of pursuing his own dream, he went to any length to support his daughter. He signed her up for a French language institute and art classes.

Unfortunately, Ha lost her father to cancer in 1989 when she was 18. 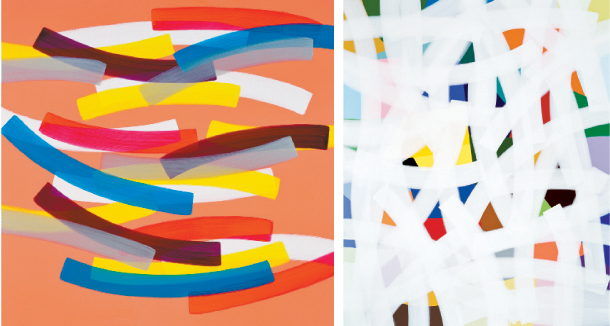 Ha wanted to keep the promise she made with her father. She left for Paris a year after her father’s death.

But her mother, who knew nothing of the promise between the father and the daughter, tried to stop Ha from flying to Paris.

Ha’s mother was extremely against the idea of her going abroad, and, eventually, Ha swore that she would never return home.

After graduating from the famed National School of Fine Arts, Ha stayed in Paris for nine years, but she eventually returned home in 1999, mainly due to the Asian financial crisis.

With a 3-month-old baby in her arms, Ha settled down in a small room of her mother’s studio without knowing that life ahead of her wouldn’t be easy.

She had a lot to juggle. She worked many part-time jobs, from being an interpreter to a temporary teacher to a private tutor. When she became financially stable, she opened a private art institute. Between work and raising a child, she received a doctorate from Hongik University in Seoul.

Financially, life was getting better but the artist was physically and mentally suffering. She could barely move her arms and the pain further worsened her depression. After going through a divorce, she was mentally exhausted.

What tormented her the most, however, was being overshadowed by her late father’s fame.

In her early days in Paris, Ha said all of her drawings were self-destructive because she thought of life as finite and considered all the communication she had as incomplete. But as she found herself being better understood, she began highlighting texts in her works, text she later deleted, leaving behind only colors. By doing so, she created the color bands that she still uses today.

Most of the time, Ha focuses on simplifying shapes and highlighting colors.

For this reason, people who love her creations often say that her colors make them feeling relaxed. Ha, who has previously struggled with severe depression, says she is also delighted by her drawings.

The artist is currently preparing to honor the 30th anniversary of her father’s death with an exhibition next year. The exhibition will put her works alongside her father’s.

She once denied the existence of her father, but now she wants her father to be remembered. She believes that is the one way she can return the love of her deceased father.

Ha added that her main work for the upcoming exhibition will be tentatively titled “Homage to Ha In-doo” or “Remembering Ha In-doo.” In the drawing, Ha said she will draw just like her father did.