Korean airlines cut back on routes to Japan

Korean airlines cut back on routes to Japan 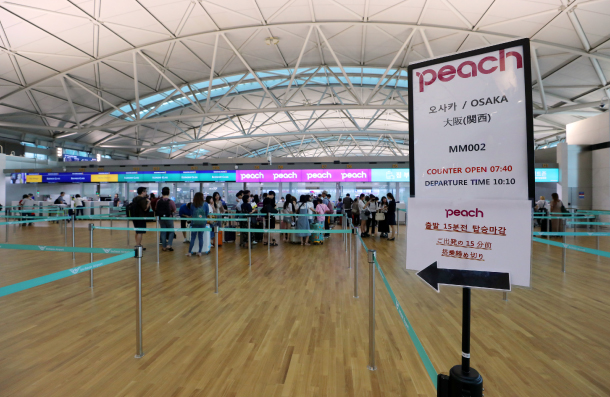 The check-in counter for a flight to Osaka on Peach Aviation, a budget airline based in Japan, is quiet Tuesday morning at Incheon International Airport as Koreans cut back on travel to Japan as a result of a recent diplomatic-trade row between the neighboring countries. [NEWS1]

Korean airlines are suspending flights and reducing the size of planes on Japanese routes as demand for seats plummets in the wake of a diplomatic-trade dispute between the neighbors.

Asiana Airlines said Tuesday that it will use smaller airplanes on flights to three major Japanese cities - Osaka, Okinawa and Fukuoka - due to the growing boycott in Korea of things Japanese.

While Airbus 330 planes were used on those routes, the smaller Airbus 321 or Boeing 767s will be used starting mid-September, the company said.

“While A330 planes can carry some 290 passengers, A321 planes offer 174 seats,” a spokesperson for Asiana said. “Reservations for flights to Japan have fallen by roughly 2 percent year on year at this point, but we decided to change airplane models in case the [diplomatic-trade row] lasts longer.”

A day earlier, Korean Air said it will temporarily suspend its thrice-weekly flight between Busan and Sapporo from Sept. 3.

The company said it has been considering cutting the route from May as its profitability has suffered due to competition from budget airlines. The recent conflict with Japan, however, made things worse.

For passengers who already booked flights on the Busan-Sapporo route, the airline will offer seats on flights leaving from Incheon. Korean Air said it will offer flights from Busan to Incheon.

The airline doesn’t know when Busan-Sapporo flights might resume.

According to a spokesperson for Korean Air, reservations for flights to Japan fell 3 percent in July compared to a year earlier.

Low-cost carriers have been quicker in announcing curtailed schedules to Japan than have been full-service carriers. The budget carriers’ main focus has been on short-haul destinations, like Japan, China and Southeast Asia.

From Aug. 12 through Oct. 26 the budget airline is also suspending Busan to Oita flights. In September, flights connecting Daegu and Kumamoto, and Busan and Saga will also be suspended through Oct. 26.

Korea’s largest budget airline, Jeju Air, has not announced any suspensions, but its spokesperson said the airline was closely monitoring the situation and there could be changes.

Koreans have been boycotting a range of Japanese products since Tokyo imposed export restrictions on important industrial materials early this month in apparent retaliation for Korean Supreme Court rulings ordering compensation to Koreans forced into labor at Japanese companies during World War II.

Since the boycott began, social media has been inundated with posts from people bragging about canceling trips to Japan. Some people who did go on Japan vacations planned long before the diplomatic row arose uploaded pictures of themselves bowing with posts reading, “I’m sorry I came to Japan.”