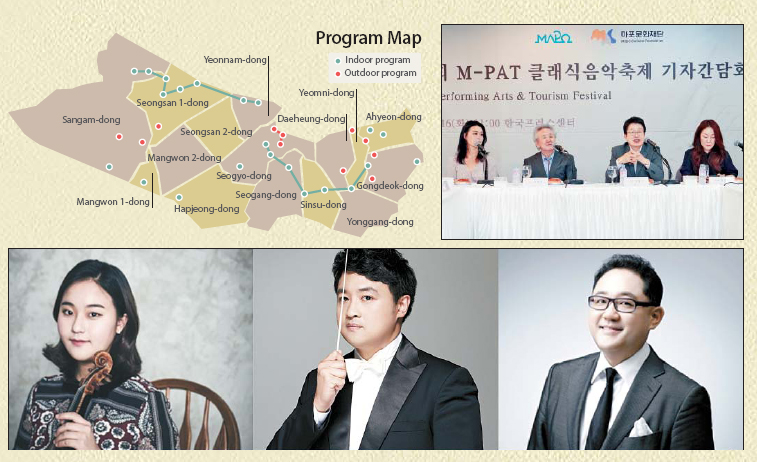 Of all the performing arts, classical music has always had an image of being high art that can only be enjoyed by the people of sophistication. Mapo Cultural Foundation has been making efforts to change that perception by organizing the annual Mapo Performing Arts & Tourism (M-PAT) Classical Music Festival in the western Seoul district that is home to hip neighborhoods like Yeonnam-dong, Hongdae, Sangsu-dong and Mangwon-dong.

Marking its fourth event this year, organizers insist that the festival allows people - including Koreans both young and old, as well as the many foreign travelers who frequent the district - to enjoy classical music and opera “with a light heart while jogging in the park, grocery shopping at local market or having a night out of drinks with friends” for the 50-day event that kicks off on Sept. 3.

“We hope to introduce classical music, which seems distant to many, to people’s daily lives,” said Lee Chang-ki, CEO of Mapo Cultural Foundation, explaining that the event’s goal is to increase the public’s accessibility to diverse classical performances.

That is why the concerts and performances of the M-PAT Classical Music Festival are not staged in a fancy theater where audiences have to turn up wearing evening gowns and tuxedos, but in ordinary places such as a school, a market, the district office, a park, a live club, a guest house and so on.

One of the highlights of the annual festival is its signature outdoor opera production. This year, the Mapo Cultural Foundation decided to stage “The Magic Flute” at the 2,000-seat outdoor Waterside Stage located at World Cup Park in Sangam-dong on Sept. 6 and 7. For this production, director Lee Hoe-soo said she decided to compress the three-hour opera into 100 minutes so that those who are unfamiliar with the opera can “lightheartedly enjoy the show with an autumn breeze.” She also translated the libretto into Korean to help the audience better understand the opera. Arias will still be sung in German.

Last year’s open-air opera production was Gaetano Donizetti’s “L’elisir d’amore,” or “The Elixir of Love,” and visitors could reserve seats for free. However, after a number of no shows, the organizers decided to sell the seats for 3,000 won ($2.50) each.

“Since this festival is being operated by the government, we also believe that the programs should be offered to the public for free,” said Lee. “But we decided a 3,000-won ticket price is inevitable to avoid too many people not showing up on the day of the performance.” Lee, however, emphasized that many of the other programs that will be held during the festival - about 70 shows by 500 artists - will be provided for free.

Above: The opening performance of this year’s festival will feature Queen Elisabeth Competition winner violinist Lim Ji-young, above left, accompanied by the Gyeonggi Philharmonic Orchestra, above, under the baton of Jeong Na-ra, above center, on Sept. 3 at the Mapo Art Center. Music critic Jang Il-bum, above right, will M.C. the opening concert. [MAPO CULTURAL FOUNDATION]

For example, the “100 Gagok [Korea’s original lyric vocal music] by 100 Gagok Singers” is a special event that has been organized for this year’s festival to mark the centenary of the style of music in Korea.

Gagok is a genre of Korean vocal music that combines emotional and poetic lyrics with instrumental accompaniment. The genre is said to have begun in 1919 with Hong Nan-pa’s song titled “Bong Sun Hwa.” This concert series will run for three days from Sept. 20 to 22 at the Art Hall Mac of the Mapo Art Center. One hundred carefully selected singers, ranging from veteran singers like baritone Park Soo-kil, 78, to up-and-coming ones, will each sing different songs.

“In the 1980s, the popularity of gagok was at its peak,” said Park. “But with the introduction of pop music in the ’90s, the genre has been somewhat isolated. We hope this concert could bring those forgotten melodies closer to the public’s hearts.”

Some of the popular programs from last year will return for this year’s festival, including a classical concert inside a club in Hongdae, left, and an open-air opera performed at the Waterside Stage located at World Cup Park in Sangam-dong. Last year, Gaetano Donizetti’s “L’elisir d’amore,” or “The Elixir of Love,” right, was performed for free. [MAPO CULTURAL FOUNDATION]

Because of the large number of foreign visitors to the festival, the organizers renamed the festival “M-PAT” and have included several guesthouses as the concert venues since last year’s festival. This year, two guesthouses will participate, including Hangang Guesthouse and Nanu Guesthouse.