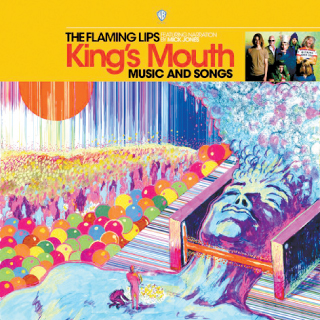 
The new album by The Flaming Lips is a head trip - literally. The ever-evolving, mind-blowing alt-rockers have somehow upped their game with a concept album and accompanying art project that takes us into a giant head. Weird? Yes. Thrilling? Of course. This is The Flaming Lips, after all.

“King’s Mouth: Music and Songs’’ is a beautifully crafted psychedelic album that may remind you of early Genesis in its musicianship and ambition.

Some songs, like the cinematic “Mother Universe’’ are instrumental, others have sound effects and the album is narrated by The Clash’s Mick Jones. It traces the life of a giant king, from birth to grave, growing in complexity and abstraction through its 12 tracks, from baby to adulthood.

The music parallels frontman Wayne Coyne’s immersive art installation of the same name that takes onlookers into a 10-foot tall chrome head, where they sit on teeth-shaped foam pillows and experience a pulsing light show triggered by the Lips’ music. It sounds like peak Flaming Lips. AP