Last chance for diplomacy with Tokyo this week

Last chance for diplomacy with Tokyo this week 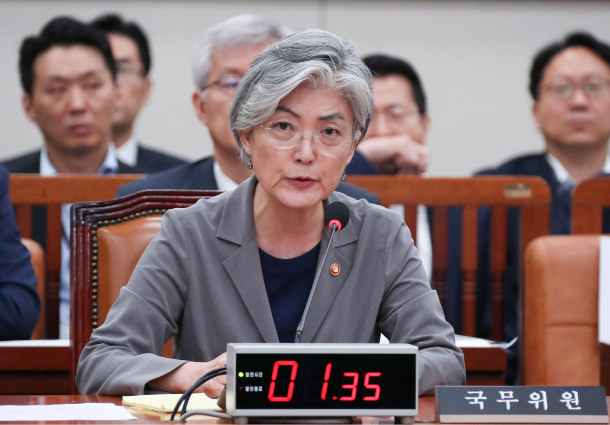 Foreign Minister Kang Kyung-wha testifies in front of the Foreign Affairs and Unification Committee of the National Assembly on Tuesday. [LIM HYUN-DONG]

Japan is expected to drop Korea from a so-called white list of countries with minimal export regulations Friday, and talks between the two countries’ foreign ministers on the sidelines of a regional security forum in Bangkok this week may be the last chance to stop it.

Tokyo has been rebuffing Seoul’s diplomatic outreaches, but Korean Foreign Minister Kang Kyung-wha and Japanese Foreign Minister Taro Kono will inevitably face each other at a series of multilateral foreign ministerial meetings related to the Association of Southeast Asian Nations (Asean), including the Asean Regional Forum (ARF) this week.

Kang told a parliamentary committee Tuesday that it is “very likely” she will meet with U.S. Secretary of State Mike Pompeo as well as Kono in Bangkok. She added that her ministry is in the process of scheduling a date and time for such meetings, leaving open the possibility of bilateral and trilateral talks involving Tokyo before a Japanese cabinet meeting Friday that could determine whether Korea is dropped from a white list of 27 countries with minimal export regulations.

The Japanese cabinet is likely to pass a motion to remove Korea from its white list on Friday, according to the Korean Ministry of Foreign Affairs in a parliamentary report Tuesday. If the motion is passed, the removal is expected to take effect in late August.

Japan has been threatening to remove Korea from the white list of trusted trade partners, which would affect its industries even more and seriously harm bilateral relations.

Seoul is bracing for the worst, but still leaving room for diplomacy.

The Moon Jae-in administration is reviewing “all options,” including scrapping a General Security of Military Information Agreement (Gsomia), a bilateral military intelligence-sharing pact with Japan signed in 2016, which is usually renewed automatically each year. If either of the two countries wants to scrap the pact, it must inform the other 90 days in advance, and the deadline to raise an objection is Aug. 24.

Kang told the National Assembly’s foreign affairs committee Tuesday that the government “may review” whether to keep the Gsomia with Japan “depending on how the situation unfolds.” She added that Seoul plans to “firmly maintain” its trilateral security cooperation with Washington and Tokyo, in a seeming nod to U.S. concerns.

Kono indicated that Japan hopes to maintain the Gsomia in an interview with the JoongAng Ilbo earlier this month.

Kang and Kono held a phone conversation last Friday, discussing North Korea’s launch of two short-range missiles the previous day. Kang also urged Tokyo “not to take measures that will deteriorate the situation,” including revising its Export Trade Control Order to remove Korea from the white list. The two ministers then “agreed to exchange views on matters of mutual interest as soon as possible on various occasions, including multilateral meetings.”

Both Kang and Kono head to Thailand Wednesday, and there will be opportunities for them to meet over the next several days.

Pompeo will also take part in the ARF, opening the possibility for a trilateral meeting. Seoul has encouraged mediation by Washington, as Tokyo’s export restrictions on Korea could affect the global supply chain and also Washington’s trilateral security cooperation with its East Asian allies.

Kim In-chul, spokesman for the Foreign Ministry, said in a briefing in Seoul Tuesday that the ministry is “in the process” of arranging meetings with Kono and Pompeo.

Kang will make a four-day visit to Thailand through Saturday, and the ARF, East Asia Summit and the Asean Plus Three foreign ministers’ meeting including South Korea, Japan and China are scheduled for Friday. Kang is expected to make use of the meetings to step up diplomatic outreach over Japan’s export restrictions.

The Foreign Ministry said in a statement Tuesday, “Minister Kang will emphasize that the trend of increased protectionism is having a negative effect in the region, and stress the importance of a free and fair trade environment as a driving force for economic growth in the region.”

Kang also plans to “demand the immediate withdrawal of unfair export restrictions implemented in the region recently,” added the ministry, without specifying Japan. Kang and Kono last met at the end of June at a Group of 20 summit in Osaka, Japan, where Japanese Prime Minister Shinzo Abe refused to hold a bilateral meeting with President Moon Jae-in.

Tokyo appears far from backing down as Japan’s Foreign Ministry on Monday revealed to reporters some documents from negotiations for the 1965 bilateral claims agreement in an attempt to prove that the forced labor issue has already been settled with Korea.

A Korean Foreign Ministry official brushed off the move and said Tuesday, “Those documents were already revealed to the public in 2005 and were also taken into consideration during [our Supreme Court] rulings.”

Tokyo maintains that a 1965 treaty normalizing relations with Seoul, which provided an economic cooperation fund, settled all compensation matters. But the Korean Supreme Court decisions last year found that the Japanese government failed to acknowledge the illegality of its colonial rule and that the victims’ rights to individual compensation have not expired.

In 2005, the Korean government declassified thousands of pages of diplomatic documents from the Korea-Japan treaty negotiation process, which further shed light on the Park Chung Hee government using the economic cooperation fund for the country’s economy rather than to compensate individual victims of colonial rule.

Japan has not officially acknowledged that its trade restrictions are retaliation for the forced labor issue and has instead cited “lack of trust” and national security concerns.

Japan’s Sankei Shimbun reported Tuesday that Abe will likely not meet with Moon in September on the sidelines of the United Nations General Assembly or other future multilateral meetings unless Seoul takes constructive steps toward resolved the forced labor issue.

Korea’s Foreign Ministry and Trade Ministry held a meeting with the diplomatic corps in Seoul Tuesday to brief them on Japan’s export restrictions and the serious impact they may have on the global supply chain.