Moon takes aim at Japan during visit to Jeo Island

Moon takes aim at Japan during visit to Jeo Island 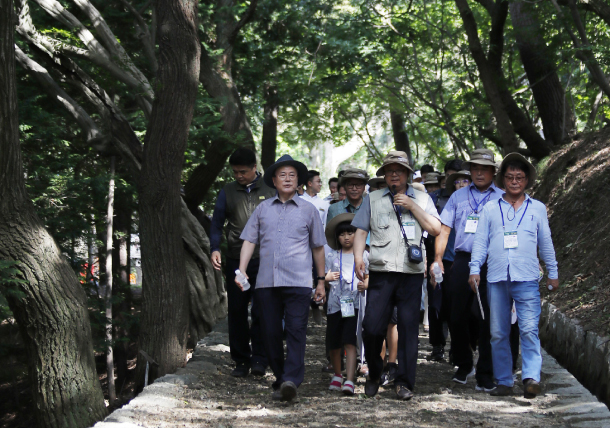 President Moon Jae-in, far left in front row, takes a walk with people on a trail on Jeo Island in South Gyeongsang, on Tuesday. Moon made a pledge in 2017 to open the previously forbidden island which has a presidential vacation home and military installations to the public. [YONHAP]

During his visit to Jeo island on Tuesday, President Moon Jae-in reminded the public of the historic meaning of the location, where Admiral Yi Sun-shin’s first victory during the Japanese invasion of Korea in 1592 took place.

“Jeo Island has a very big historical meaning,” Moon said in his opening remarks. “The waters off the island were where Admiral Yi Sun-shin scored his first victory against Japan in the Battle of Okpo.”

In the naval battle on May 7, 1952, Yi defeated the invading Japanese fleet in the waters off Okpo in Geoje, South Gyeongsang. It was the first in a series of the admiral’s naval victories in the war that spanned from 1552 until 1598.

It is the second time Moon mentioned Yi, the iconic naval commander best-known for his victories against Japan, in recent weeks amid the escalating diplomatic spat with Tokyo.

In an apparent jab at Japan, Moon made his first reference on July 12. He said Yi’s “patriotic spirit” lives on in that part of Korea during his visit to South Jeolla.

“It was residents of South Jeolla who, along with Admiral Yi, protected the country with only 12 ships,” Moon said, referring to the admiral’s most famous victory in the Battle of Myeongnyang in 1597, where he destroyed 31 out of 133 Japanese ships with only a dozen vessels.

Yi’s invention, the turtle ship, also made appearances in two Blue House events this month. When Moon’s National Security Office Director Chung Eui-yong met with visiting U.S. National Security Advisor John Bolton at the Blue House on July 24, a model of the turtle ship, built by Yi to fight invading Japanese navy and often recognized as the first armored ship in the world, was placed behind them.

On the same day, Moon also had lunch at a restaurant in Busan named Turtle Ship, although the Blue House later said there was no political intent when selecting the venue.

Moon’s latest reference to Admiral Yi on Tuesday was made while he was giving a speech during his visit to Jeo Island in Geoje, South Gyeongsang, to launch a pilot tour program. Public access has long been restricted on the island, currently managed by the Navy, and Moon pledged during his campaign to “return the island to the people.”

The Geoje city government, the Ministry of Interior and the Ministry of National Defense had a meeting in May and agreed to allow public access to the island for one year starting September. The island will be open to up to 600 tourists daily for five days a week, excluding Mondays and Thursdays, from 10:30 a.m. until 5 p.m., according to the plan.

About 100 people were invited to take a stroll on the island with the president on Tuesday.

Moon said his visit to the island in 2017 further inspired him to keep the pledge to allow public access.

Moon also asked the local governments to use the island as a new tourism resource.

Presidential spokeswoman Ko Min-jung said the military installations and Cheonghaedae will remain as restricted areas, but the beach in front of the former presidential resort will be open to the public.

Following the address, Moon and about 100 guests took a stroll around the island.

Among them was Yun Yeon-sun, an original resident of the island, and her family. After the presidential resort was officially completed in 1973, they were the last residents to leave the island.

In 1993, former President Kim Young-sam took Cheonghaedae off the list of presidential resorts, but it was designated as a presidential villa again in 2008. Moon, during his 2017 presidential campaign, pledged to restore public access to the island.