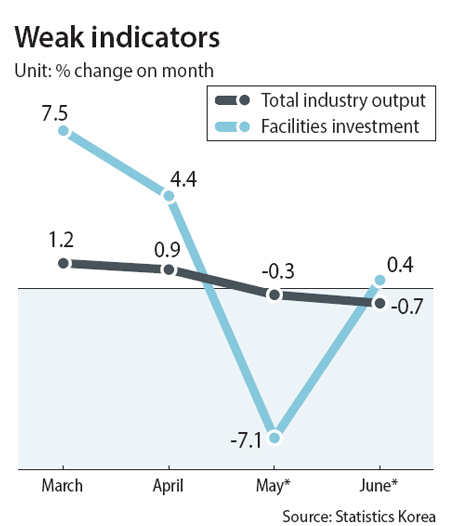 Korea’s industrial output in June fell for the second straight month as the country’s manufacturing sector continued to struggle to recover from a slump.

Statistics Korea reported Wednesday that the country’s total industrial output index fell 0.7 percent on month in June, faster than the 0.3 percent decline in May. The index fell 1.1 percent in June compared to the same month the previous year.

The total industrial output index serves as an indicator for activity across all industries and covers mining and manufacturing, construction, services and public services.

The statistics agency blamed uncertainties, such as the U.S.-China trade conflict and a global slowdown in manufacturing.

Although output from manufacturing rose 0.2 percent on month in June, improving from May, it fell 3.1 percent compared to the same month a year earlier.

The production capacity index for manufacturing, which indicates the sector’s maximum production ability by considering the current workforce, facilities and work time, slumped 1.6 percent in June from the same period a year earlier, marking the 11th consecutive month of year-on-year declines.

The agency also reported that the operation rate index for the manufacturing sector fell 2.4 percent in June from the same period a year earlier. The fall was led by a 9.3 percent decline in chemical products and a 20.5-percent decline in telecommunication equipment and broadcasting equipment.

The agency explained that investment in auto and transportation equipment fell 12.9 percent compared to the same month the previous year.

Consumption also declined as the retail sales index fell 1.6 percent compared to May. The government blamed slow sales of autos and clothing for the decline.

The agency was not upbeat about industry activity in July, as it would reflect the impact of Japanese export restrictions on semiconductor materials, implemented from July 4.

The statistics agency’s composite leading indicator, which predicts the future direction of the economy, fell 0.2 points to 97.9 in June from May. A fall in the indicator suggests a worsening economy.