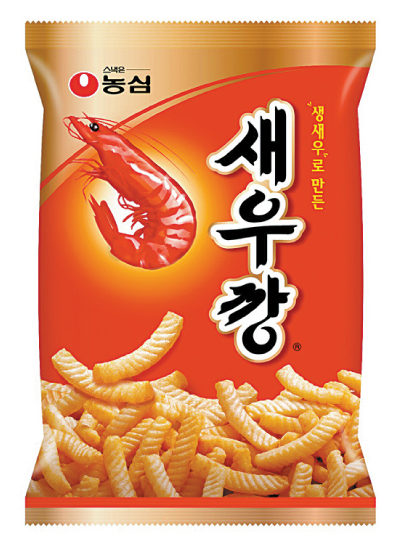 Nongshim on Tuesday withdrew its plan to fully rely on U.S. shrimp for making Saewookkang, but the company on Wednesday remained vague on how much Korean shrimp will be used in the production of the snack.

Nongshim last week announced it will replace local shrimp with U.S. shrimp in making Saewookkang. The frequent appearance of foreign matter in local Southern Rough shrimp, caught by fishermen based in Gunsan, North Jeolla, was the primary reason for the decision, the company said.

Nongshim has annually purchased 300 tons to 500 tons of Southern Rough shrimp caught in the Yellow Sea.

The decision met with a major backlash from local fishermen, sea food market affiliates and political figures, including Gunsan Mayor Kang Im-june, who was incensed by the disparaging of the quality of sea creatures caught in the Yellow Sea.

They also claimed the main reason behind Nongshim’s decision was the price.

Korean shrimp are said to be 10 percent to 15 percent more expensive than those from the United States.

Nongshim changed its stance Tuesday after affiliates from Gunsan and North Jeolla came for a visit and promised to control the quality of shrimp.

“We decided to accept the offer under the condition that the quality is guaranteed, but the proportion of the Korean shrimp and the U.S. shrimp we will use to make Saewookkang remains undecided,” said a spokesperson for Nongshim.

Nongshim started to buy half of the shrimp supply from the United States since 2016, citing the foreign matter.

“Over the years, removing foreign matter from local shrimp has become a burden for the company. We requested quality control eight years ago, but we couldn’t see the improvement,” said the spokesperson.

The primary reason for the poor quality control of local shrimp is the method of catching the sea creatures.

In Korea, fishermen throw the net to the bottom of the sea to catch the shrimp, while the shrimp in the United States are caught in the water of the deep sea, according to Nongshim.

“It’ll be difficult to change the method local fishermen use to catch the shrimp, but we expect the fishermen to be more meticulous in the process of picking out quality shrimp,” said the spokesperson.

Nongshim released Saewookkang in 1971. The snack is sold in 70 countries around the world.