The bad guys save the day for a change: Hit TV series gets the big screen treatment with new and familiar faces

The bad guys save the day for a change: Hit TV series gets the big screen treatment with new and familiar faces 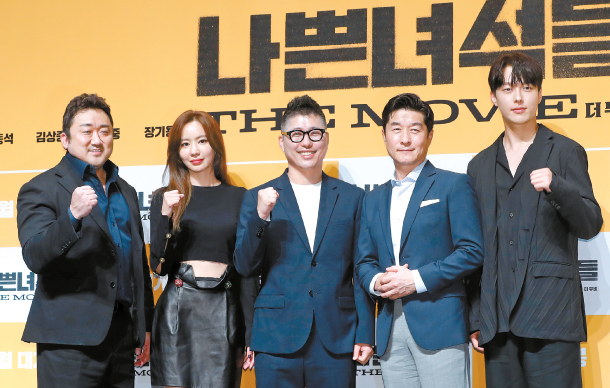 The cast of “The Bad Guys: Reign of Chaos” pose for photos at a press conference to promote the film at the Apgujeong CGV in southern Seoul, on Monday. From left are actors Ma Dong-seok, Kim A-joong, director Son Young-ho, actors Kim Sang-joong and Jang Ki-yong. [NEWS1]


What would happen if a convoy packed with criminals is overturned and all of the passengers escaped?

That is how ‘The Bad Guys: Reign of Chaos” starts off, with evil being released into world. After much deliberation, the police decide to call in Oh Gu-tak (played by Kim Sang-joong), a former detective notorious for his ruthlessness and cruelty when catching the culprits.

With a new mission and handful of targets to catch, Oh decides to form his own special criminal investigation team, but ironically, they are all convicts recruited from prison, still serving their sentences.

The basic storyline - bad guys collaborating to catch other bad guys - is not entirely new. The movie is based on the popular OCN drama series “The Bad Guys,” which was a hit and featured a star-studded cast, including Kim Sang-joong, Ma Dong-seok and Park Hae-jin playing the lead roles.

“While we were filming the TV series, we were thinking that it would be great if it could be made into a film,” said Ma at a press conference for the film on Monday. “I personally welcome the transition from drama to film and vice versa.”

Ma and Kim Sang-joong reprise their roles from the original drama: Ma plays Park Woong-cheol, a former gangster with the nickname “legendary fist,” who is able to punch his way through everything, and Kim Sang-joong plays the ill-famed detective and the leader of his shady investigative team.

As the film title suggests, “The Bad Guys: Reign of Chaos” will be extra chaotic and more powerful than the original, according to the director Son Young-ho. As much as the actors and the crew focused on providing impressive action sequences for the entertainment of the local audience, they were also keen on balancing the action scenes with comedy.

“This is the first time an OCN drama has been made into a film,” added Kim Sang-joong. “It was exhilarating to hear the news, and I was eager to take on the role again with confidence, knowing I could do this well, but at the same time, I felt nervous because I want to do it even better than before.”

Two new cast members were added to complete the quartet: Kim A-joong, playing Kwak No-soon, a swindler able to deceive anyone with her charms and looks, and Jang Ki-yong, playing Ko Yoo-sung, a former detective who ended up in jail due to killing a culprit in the process of catching him.

This is Kim A-joong’s first role in an action film.

“It was challenging but fun, especially after I learned that my character was originally male,” Kim said. “It was also interesting to play Kwak because she’s a very complex character. The audience and the rest of the characters will not be able to figure out who she is in one go. As the story develops, she shows new talents that she previously only used for her own swindling. This time, however, she will use them to catch the bad guys.”

The director admitted that he felt pressure to do well because he is a fan of the original series as well. But he was sure that the story could develop on grander cinematic scale with a cast that perfectly matched the roles that they played.

“Kim Sang-joong is righteous, Ma is witty and loyal, Kim A-joong is smart and crafty and Jang is young and handsome,” said Son as he listed the qualities of the actors that matched their characters.

Kim Sang-joong, also the M.C. of the famous SBS investigative reporting program “Unanswered Questions,” expressed his satisfaction for being able to put himself in crime scenes through his character.

“My role in the program is to report the truth and publicize the horrible crimes committed by the criminals,” said Kim. “But I couldn’t go catch the culprit myself, and I guess there was some thirst for justice in me. It was thrilling to be at the heart of the crime scenes and be able to catch the bad people [although it was on the set.]”

Kim added that although his character Oh and him share spite and contempt for injustice, Oh actually resolves the crimes, which is what Kim loved the most about him.

“We gave a lot of thought to developing the characters because we believed that was essential [in differentiating the film with the original],” said the director. “But we can be certain that the film will be more action-packed, to the point where the audience will be able to feel a kind of catharsis watching the ‘bad’ protagonists catch the truly evil convicts.”

Ma also expressed a few words of gratitude when asked about being cast as the superhero Gilgamesh in an upcoming Marvel film.

“An almost impossibly good thing happened to me,” he said. “It’s like a baseball player being asked to play for the major leagues. I’m really thankful for this chance.”

The actor said that he will travel between the United States and Korea while working on the movie, as he has plans to film local films as well, such as “The Outlaws 2.”

“The Bad Guys: Reign of Chaos” is slated to premiere in local theaters during the upcoming Chuseok [Korean Thanksgiving] holiday next month.