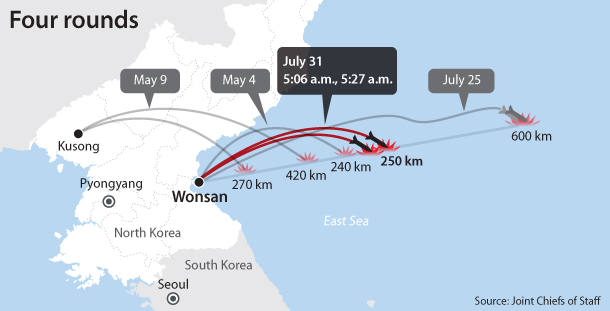 North Korea on Wednesday launched two short-range ballistic missiles from its eastern coast, the second such test in six days.

According to South Korea’s Joint Chiefs of Staff (JCS), the missiles were fired at 5:06 a.m. and 5:27 a.m. from an area around Kalma near Wonsan, Kangwon Province. Both projectiles flew around 250 kilometers (155 miles) at an altitude of approximately 30 kilometers before landing in the East Sea, a JCS spokesman said.

The first missile to be fired was spotted by Korea’s Master Control and Reporting Center (MCRC) and a Navy vessel equipped with the Aegis Combat System, while the second was detected by the MCRC, the ship and early warning radar.

While it is not yet known what kinds of rocket were launched Wednesday, they may be similar to those fired on July 25, which are believed to be domestically produced variants of the Russian-made 9K720 Iskander missile system, code named KN-23 by South Korean and U.S. intelligence.

The South Korean government classified the weapons fired by the North on July 25 as a new type of ballistic missile, unique in its low-flying trajectory and ability to perform a pull-up maneuver in the dive phase that makes it harder for antimissile systems to detect and intercept.

“North Korea’s consecutive missile launches do not help alleviate tensions on the Korean Peninsula, and we urge them to cease such actions,” said the JCS.

The Blue House’s National Security Office expressed “grave concern” over Pyongyang’s missile launches over the course of a week, saying they may have a negative effect in building peace on the Korean Peninsula. It added that diplomatic efforts would continue, however, toward the goal of North Korean denuclearization.

The missiles fired last week, which North Korean leader Kim Jong-un personally oversaw while apparently on holiday in Wonsan, flew around 600 kilometers, significantly further than those launched in tests on May 4 and 9.

The significant feature of Wednesday’s test was the missile’s low peak altitude of 30 kilometers. South Korean Defense Minister Jeong Kyeong-doo at a security forum Wednesday said that South Korean and U.S. intelligence saw in the North’s newest tests “different indicators” than before.

Analysts said Pyongyang may have deliberately chosen to test a variety of trajectories for its KN-23 missile system since May in order to send a message to Seoul and Washington that it possesses the capacity to evade their most sophisticated antimissile defense systems.

According to Kim Dong-yub, director of research at Kyungnam University’s Institute for Far Eastern Studies, both the U.S.-led Terminal High Altitude Area Defense (Thaad) antimissile system and Patriot surface-to-air missiles at the disposal of South Korea and the United States may be unable to deter ballistic missiles capable of flying at speeds of Mach 6 or Mach 7 at a maximum altitude of 30 kilometers.

Yet the South Korean military and the Combined Forces Command maintain that the allies have the capacity to deter a North Korean variant of an Iskander missile. Defense Minister Jeong in particular stressed Wednesday that even with the KN-23’s ostensible ability to perform pull-up maneuvers, Seoul had defensive assets capable of striking it down.

While Seoul and Washington responded delicately to last week’s missile tests so as not to endanger denuclearization talks with Pyongyang, they are also taking measures to upgrade and expand the South’s missile defense systems.

The South Korean military plans to deploy the upgraded PAC-3 MSE, the latest upgrade to the Patriot missiles, from 2021 to 2023, which has greater accuracy and range.

A more alarming development may be that the North’s frequent short-range missile tests have kicked off an arms race between the two Koreas. The South Korean military currently possesses a ballistic arsenal adapted from the Russian Iskander, known as Hyunmoo-2B, which Jeong appeared to refer to on Wednesday when he said the South’s Agency for Defense Development had technology with “superior precision” to the North’s KN-23.

With the North Koreans beefing up their missile deployment around the country, Seoul is reportedly responding by ramping up further production of its own Hyunmoo missiles.