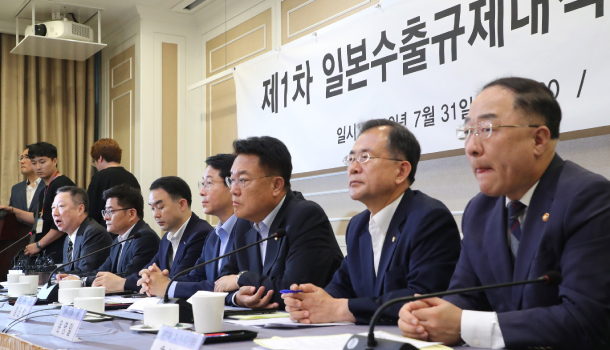 Korea Chamber of Commerce and Industry Chairman Park Yong-maan, far left, speaks at a meeting of the emergency tripartite council of the government, political parties and the private sector at the National Assembly Wednesday. [YONHAP]

An emergency tripartite council of the government, political parties and the private sector discussed measures to counter Japan’s economic retaliations on Wednesday, however, the ruling party and the government and the conservative opposition parties presented different directions on how to resolve the escalating supply crisis.

The first meeting of the tripartite council took place at the National Assembly in the morning, with Deputy Economic Prime Minister Hong Nam-ki and Korea International Trade Association (KITA) Chairman Kim Young-ju elected as co-chairmen. The council was formed to follow through on an agreement between President Moon Jae-in and leaders of five main political parties on July 18.

Top policymakers of the five ruling and opposition parties, including the Democratic Party (DP) and the Liberty Korea Party (LKP), attended the meeting. From the government, Hong as well as Minister of Trade, Industry and Energy Sung Yun-mo and Presidential Chief of Policy Kim Sang-jo were in attendance.

The LKP said the Federation of Korean Industries should also be included in the council, and Hong said the issue will need further discussion.

“Japan’s export restrictions are a clear economic retaliation against the Korean Supreme Court’s rulings, ordering [Japanese firms] to compensate forced labor victims,” Rep. Cho Jeong-sik of the DP said during the meeting. “It is also an act of economic aggression toward Korea… We must use this crisis as an opportunity to end the industry’s heavy reliance on components and material supplies from a particular country and advance localization.”

Rep. Chung Jin-suk of the LKP, however, said both the leaders of Korea and Japan are responsible for the escalated tensions.

“Japanese Prime Minister Shinzo Abe expanded the history issue to an economic issue. Our government is now expanding it to a security issue by mentioning the possibility of scrapping the Gsomia [General Security of Military Information Agreement],” he said. “In an economic war, there is no winner. It hurts both countries. Now we need to stop this emotional war and start a cool-headed negotiation.”

Rep. Chae Yi-bai of the Bareunmirae Party said experts on Japan and international relations must be included in the council, not just the business lobbies hit by the export restrictions. “It is worrisome that the council will end up being used to support the government’s current anti-Japan, emotional responses,” he said.

“The government will support research and development by spending budgets and offering tax benefits and financial assistance,” he said. “The political parties offer legislative support by changing or creating necessary laws.”

They agreed that the government will soon announce a competitiveness boost plan, where over 1 trillion won ($845.5 million) will be invested for components, materials, equipment and technology development. Massive deregulation in the concerned industries was also being prepared, Hong said.