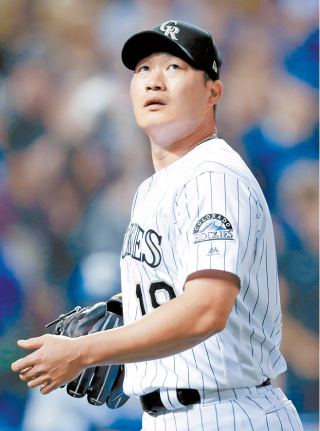 After getting released by the Colorado Rockies, Oh Seung-hwan is likely to return to the KBO. [AP/YONHAP]

Oh Seung-hwan of the Colorado Rockies is very likely to make his return to the KBO.

After the Rockies designated Oh for assignment, he returned to Korea on Monday and is scheduled to get elbow surgery soon.

“We’ve been told by Colorado [Rockies] that if he gets a surgery in the United States, he’ll be able to return in two months,” said Kim Dong-wook, Oh’s agent and the head of the agency Sports Intelligence. “But Oh Seung-hwan wants to get a surgery in Korea.”

Although Oh had been the best closer in Korea, picking up 399 saves from his career in the KBO, in the Nippon Professional Baseball (NPB) and in the major, he doesn’t have much say as to which KBO clubs he can play for. As Oh wasn’t a free agent when he joined the Hanshin Tigers of the NPB in 2013, he can only sign a yearly contract with the Samsung Lions.

“The deadline for the other major league clubs to sign with Oh Seung-hwan is over,” said the Lions on Wednesday. “Since the deadline ended [on Tuesday, local time,] we’ll talk to Oh Seung-hwan. Both the club and the player are optimistic about the contract.”

Oh’s had a disappointing season with the Rockies by picking up three wins, a loss and three holds with a 9.33 ERA in 21 games.

Even after Oh takes time off to rehabilitate, it is likely that he’ll be playing in a KBO game in the spring next year, at the earliest, because he has to fulfill his punishment he received from the KBO in 2016 for oversees gambling.

At the time, Oh was given a half-season suspension by the KBO for overseas gambling. As he headed to the majors in 2016, Oh didn’t serve his suspension, meaning that he’ll have to fulfill it if he wants to return to the KBO.

Due to this reason, if the Lions rush the process and sign him this season, it will allow him to make his return earlier. If the Lions signs Oh this season, while he’s already out for a surgery, his absence will count as a part of the half-season suspension. Then, he’ll have to fulfill the remaining games of the suspension in the following season.

Oh made his KBO debut with the Lions in 2005 and was a dominant closer in the Korean league, picking up 28 wins, 13 losses and 277 saves with a 1.69 ERA in 444 games over nine years in Korea. With Oh, the Lions won five Korean Series titles.

Then, he continued his success in Japan before heading to the majors. During his first year in the big league with the St. Louis Cardinals, Oh picked up six wins, three losses, 19 saves and 14 holds with a 1.92 ERA.

However, he struggled in his second season. Due to this, once his contract with the Cardinals ended, Oh signed a one-year contract with the Toronto Blue Jays at $2 million with an option for a second year. However, his career with the Jays didn’t last long as he got traded to the Rockies while in season in 2018. Despite his trade in the middle of the season, Oh finished strong by picking up two wins, eight holds and one save with a 2.53 ERA for the Rockies.

Then, as the Rockies advanced to the postseason, Oh became the first Korean to appear in a postseason game in Korea, Japan and the United States.