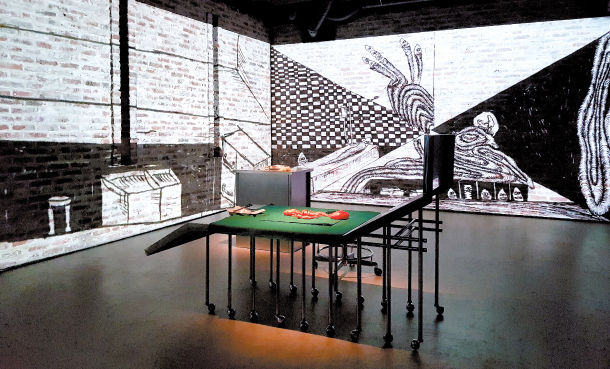 The hand-drawn animation projected on the walls and the installation work related with the animation’s plot are part of Raejung Sim’s solo show “B-301” at the Arario Museum in Space in Seoul. [MOON SO-YOUNG]

Raejung Sim, 36, known for her violent, dark and humorous black-and-white hand-drawn animations, and Eunsae Lee, 32, known for her colorful paintings of bold strokes hovering between expressionist art and cartoon, share some commonalities.

The two artists express the anxiety, fear and anger of Korean young people, in particular, those of young women, in neither abstruse nor superficial ways. At the same time, they keep tinges of humor throughout their own dark and grotesque worlds built in their powerful drawings.

Sim is holding a solo show titled “B-301” at the Arario Museum in Space, located in central Seoul. Lee is participating in a group show of emerging artists, entitled “Young Korean Artists 2019: Liquid Glass Sea” at the National Museum of Modern and Contemporary Art (MMCA) in Gwacheon, Gyeonggi.

Sim and Lee together recently started a two-person show titled “Nothing” that features their drawings at the Kyobo Art Space, located inside Kyobo Bookstore Gwanghwamun in central Seoul.

In this exhibition, Sim presents 15 pieces of works including the very drawings for the three-channel animation now on view in the “B-301” show at Arario.

The animation, projected on the walls of a dark room in Arario, unfolds a nightmare-like story in which a man is kidnapped and gets his head separated from his body, which the abductors take for themselves. His abandoned head is saved by a woman and, through a surgery she conducts, is combined with other victims’ heads. In the middle of the dark room are some installation works that will remind the viewers of the surgery. 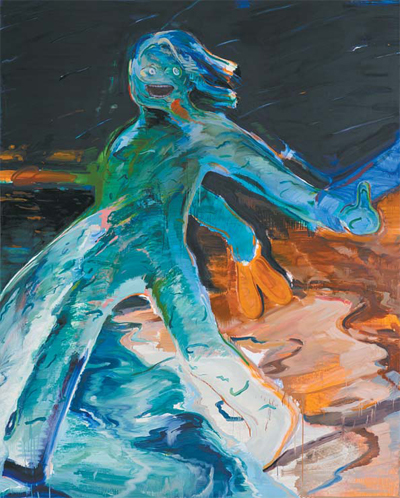 “Everyday I make drawings inspired by the news and things happening around me, many of which arouse stress and dislike of humankind,” said the artist. “Then, I make a story line to link the drawings; I never draw up a story first.

“Maybe I’m more sensitive to human violence including trivial violence than other people are while being timid,” she continued. “My mother’s lengthy struggle with disease and the events caused by this added to my stress and susceptibility. That’s why my animations include many images of surgeries. If I hadn’t been able to express my disgust and anger through art, I might have killed myself.

“But this work does not have as strong hate and aggression against humankind as my earlier works,” she added. “My mother passed away four years ago. Now my mental state is somewhat stabilized. Missing her, I have come to be more interested in humans.”

Meanwhile, in the two-person “Nothing” show, Lee presents 22 drawings, which she had made for the paintings in the “Night Freaks” series. She also presents two of these paintings.

When she unveiled the paintings at her 2018 solo show titled “Night Freaks” at Alternative Space Loop in western Seoul, it attracted a lot of attention from art fans, particularly young women.

The paintings depict drunken women on streets, women having a good time or women exercising at night.

“Night is often a fearful time for young women,” the artist said in an interview with a curator of Alternative Space Loop. “To hunters, drunken women are the easy targets for crimes and sexual advances. But these ‘Night Freaks’ are very aggressive and fearful creatures that cannot be hunted. They are full of energy of anger and madness. They are ready to counterattack the hunters.”

Like Sim, Lee also starts with drawings inspired by fragments of reality that she has encountered during her everyday life as well as in films and the news. Then, she creates large-scale paintings based on the drawings. The “Night Freaks” series deal with the reality of current Korean society where various sexual crimes against women and the fear and anger women have has led to large-scale street protests several times. Lee’s works give viewers the pleasure of subverting reality and show the women who have become “Night Freaks” can fight back against the freaks of reality.