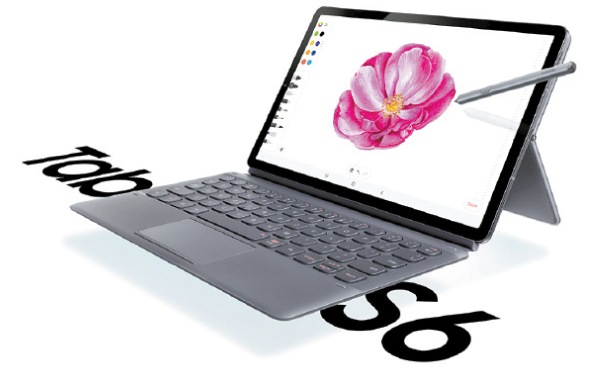 Samsung Electronics released its Galaxy Tab S6 on Thursday, a device with an improved S Pen and camera.

Galaxy Tab S6 has a 10.5 Super Amoled display and a redesigned S Pen, which has functions like a remote control, with wireless charging and up to 10 hours of battery life.

S Pen Air actions, a gesture function based on the built-in BLE (Bluetooth low energy) remote control features, enable users to take selfies and videos or control the content they create at a distance from the device.

The device also features a dual ultra-wide camera on a tablet with a 5.7-millimeter (0.22-inch) thick body.

The ultra-wide camera allows users to capture a 123-degree field of view, slightly less than the human eye. The presence of a Neural Processing Unit - a microprocessor that specializes in the acceleration of machine-learning algorithms - helps users take professional photos through enhanced effects, according to Samsung.

Samsung hopes the improved functions could help users express their creativity and be productive.

“Today’s inspiration comes at a moment’s notice, and creatives and professionals need a device to be able to keep up with insatiable imaginations while complementing their busy, on-the-go lifestyles,” said Koh Dong-jin, president and CEO of the IT & Mobile Communications Division at Samsung Electronics. “The Galaxy Tab S6 enables consumers to unlock their creativity, while delivering the top-quality productivity features and advanced technology they have come to expect from Samsung tablets.”

The company added the on-screen fingerprint scanner and a defense-grade security platform to the tablet. Waking up the device has become more convenient, which can be done by tapping on the screen twice.