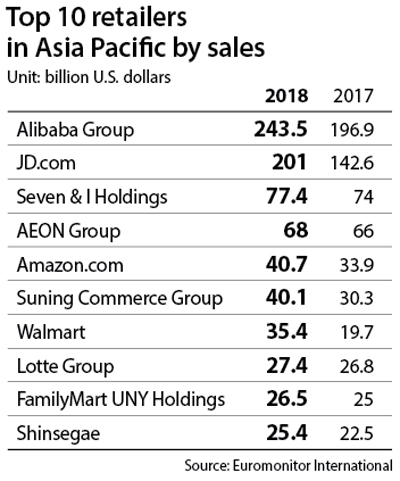 E-commerce businesses are driving the growth of retail in the Asia-Pacific region, led by Alibaba, JD.com and Amazon, according to research conducted by Euromonitor International.

The London-based researcher forecast that the online retail trend will likely continue in Asia, with consumers increasingly preferring convenience and with the rise in the reliability of smartphones.

Research by Euromonitor on Thursday showed that three of the top five retailers in Asia-Pacific were e-commerce businesses.

Alibaba topped the chart, with a sales value of $243.5 billion. JD.com, also Chinese company, followed, while Seven & I Holdings and the Aeon Group, both based in Japan, were third and fourth respectively. Amazon rounded out the top five.

Among local firms, Lotte was ranked eighth, while Shinsegae came in at No. 10. Hyundai Department Store and GS Holdings stood 23rd and 24th, while Coupang was 57th.

Digital commerce has rapidly grown over the past few years and is seen continuing to do so in the future due in part to the rise of the marketplace model, in which sites act mainly as intermediaries and don’t actually hold their own inventory.

Last year, 47 percent of all digital B2C commerce sales were made through marketplace model sites, a jump from 27 percent in 2009.

A wide selection of products, security of payment and the reliability of delivery contributed to the growth of the business model, according to Euromonitor.

The research company noted that food and drink internet retailing achieved remarkable growth across Asia-Pacific, prominently in Korea and China.

“E-commerce has eclipsed non-store retailing in Asia-Pacific, with urban consumers shifting from bulk purchases to a ‘buy as you need’ mentality,” said Ivan Uzunov, research manager at Euromonitor International. “While traditional grocery remains strong in emerging Asian economies, more consumers are turning to modern formats, especially forecourt retail and convenience stores. The major shift of the consumers though is away from the physical store as shoppers become more comfortable with buying non-grocery products online.”