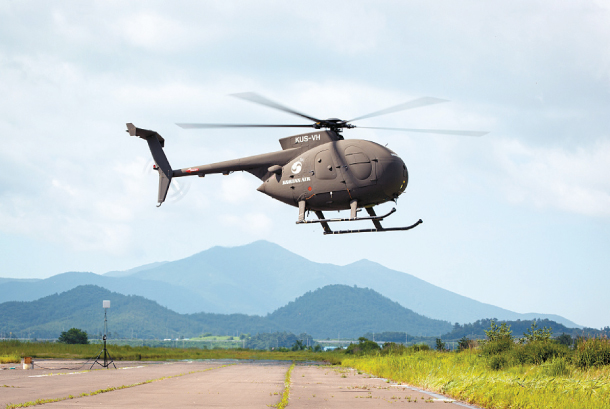 The 500MD KUS-VH was flown Tuesday for 30 minutes at an aviation center operated by the Korea Aerospace Research Institute in Goheung, South Jeolla. The helicopter took off and hovered 10 meters above ground.

Korean Air, the country’s largest airline and an aerospace manufacturer, has been developing the unmanned helicopter since 2014. By the end of 2021, it will add other technologies so the helicopter can fly farther and higher to carry out more tasks.

The 500MD helicopter is a copter being retired by the Korean army.

As Korean Air is making them useful again with unmanned technology, the airline said the technology can help reduce national defense expenditures and also save the country from losing pilots in dangerous flying zones.

“We were able to prove our unmanned technology for helicopters through the test flight ... in the future, we believe we can apply the technology on fixed-wing combat planes like F-5 as well,” said Kang Jong-koo, managing vice president of Korean Air’s research and development center. “By reflecting customer requests, we will do our best to export our technology.”

Korean Air began commercial production of 500MD military helicopters from 1976 and supplied the copters to the country’s army from 1976 until 1988.