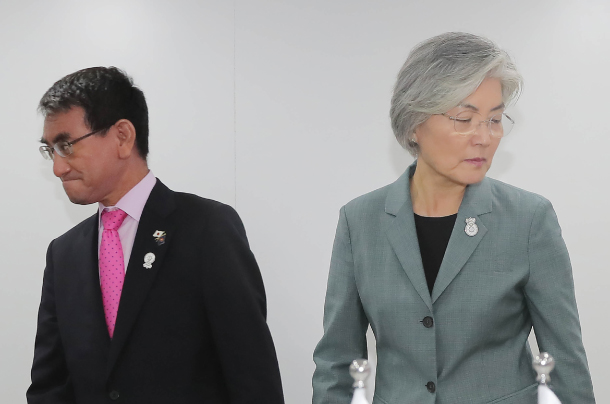 Japan’s Foreign Minister Taro Kono, left, and Korea’s Foreign Minister Kang Kyung-wha return to their respective seats after shaking hands before a bilateral meeting on the sidelines of the Asean Regional Forum at the Centara Grand Hotel in Bangkok on Thursday. [YONHAP]

Seoul and Tokyo’s top diplomats were unable to narrow any differences during tense bilateral talks in Bangkok Thursday, and Japan appears poised to remove Korea from a list of countries with minimal export restrictions today, which will bring a major escalation of the crisis.

In their first face-to-face meeting since Tokyo unveiled export restrictions on high-tech materials to Seoul one month ago, Korean Foreign Minister Kang Kyung-wha and Japanese Foreign Minister Taro Kono held talks on the sidelines of the Asean Regional Forum (ARF) for around 45 minutes over their deepening diplomatic-trade spat, which could impact future bilateral security cooperation.

The two ministers - who both arrived in Thailand the previous day to attend a series of Asean meetings through Saturday - were stone-faced and exchanged terse greetings ahead of talks.

Kang told reporters in a short briefing after the meeting, that she “clearly requested” Japan not to drop Korea from its list of trusted trading partners and stated “concerns that there will be serious ramifications on bilateral relations if such a decision is made.”

She said Japan didn’t have any response to her request.

On July 4, Japan implemented restrictions on exports to Korea of three key materials needed to manufacture semiconductors and displays. The Japanese cabinet may reach a decision today on whether to remove Korea from its so-called white list of 27 countries given preferential treatment in export procedures - a measure that would be implemented later this month and would bring bilateral relations to a disturbing low.

Tokyo maintains that a 1965 bilateral claims agreement resolved all compensation matters. Tokyo has yet to officially acknowledge that its trade restrictions are retaliations for the forced labor issue and has instead cited lack of “trust” and national security concerns, even suggesting Seoul may have violated UN sanctions on North Korea with lax export controls on dual-use products. Seoul has rejected those accusations.

Kang told reporters that “depending on Japan’s cabinet decision tomorrow, we will also have to take necessary corresponding measures” and possibly reconsider the security framework between Seoul and Tokyo.

“Insofar as Japan has cited the reason for its export control measures as being security reasons, we will also have to review the security cooperation framework between Korea and Japan,” Kang added.

Seoul has been reviewing options including scrapping its General Security of Military Information Agreement (Gsomia) with Tokyo. This bilateral military intelligence-sharing pact signed in 2016 is usually renewed automatically annually, and the deadline for either side to raise an objection this year is Aug. 24.

When asked if this would mean not renewing the bilateral Gsomia, Kang only replied that she made clear “that there could be an impact on Korea and Japan’s security cooperation.”

With Tokyo not backing down, Washington has indicated it is willing play a mediating role, especially with reports that U.S. officials have proposed to the countries a “standstill agreement” to delay Japan dropping Korea from the so-called white list and buy some more time to negotiate.

U.S. Secretary of State Mike Pompeo arrived in Bangkok Thursday and said en route that he plans to encourage Seoul and Tokyo to “find a path forward” in trilateral talks with Kang and Kono, expected to be scheduled for Friday.

Fractured relations between Seoul and Tokyo will affect trilateral security cooperation and Washington’s Indo-Pacific Strategy, seen as a policy to contain China, and also its efforts to denuclearize North Korea.

Kang said she told Kono that it is necessary to have “time and room for consultations” over the white list exclusion and the forced labor issue, ahead of U.S. mediation.

But a Korean Foreign Ministry official told reporters after the bilateral meeting, “There was no big change in Japan’s position.”

The official added that Kang “conveyed that unlike Japan’s claim, the export measures do appear connected to the forced labor rulings” and strongly requested a way to delay the white list removal. However, there was no discussion specifically of a standstill agreement, the official said. During her four-day visit to Thailand, Kang will take part in the ARF, East Asia Summit and other Asean-related foreign ministerial meetings and bilateral talks, all platforms to seek support from other countries in the fight against Japan’s export restrictions. Kang raised Japan’s measures in bilateral talks with Chinese Foreign Minister Wang Yi Thursday.

Despite the last-minute diplomacy taking place in Thailand, Akira Amari, a lower house lawmaker from Japan’s ruling Liberal Democratic Party (LDP) and chairman of the LDP’s Election Strategy Committee, said that it was “100 percent” expected that the Japanese cabinet on Friday would remove Korea from the list of countries, reported the Sankei Shimbun Thursday.

The Japanese newspaper said that Amari, a former economic revitalization minister and close ally of Japanese Prime Minister Shinzo Abe, made the remarks on a BS-TBS TV program broadcast Thursday evening and said that Korea is the only Asian country on this so-called white list. He claimed that Korea is only being “returned to a normal country after receiving preferential treatment” and that this is “not some economic measure.”

President Moon Jae-in on the eve of Japan’s possible dropping of Korea from the list held a two-hour meeting in Seoul with his prime minister and top aides and ministers to discuss the situation. A presidential aide said, “The Blue House and related ministries are doing their best to continue to discuss what is the best way to respond to every changing situation.”

Should Tokyo decide go ahead with the removal, Moon may review making a public statement on Japan next week.