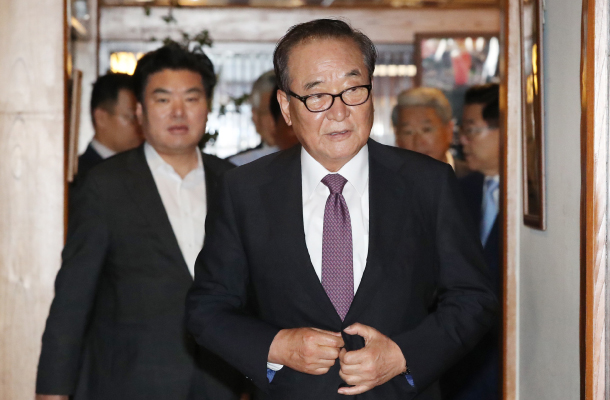 Rep. Suh Chung-won, an eight-term lawmaker leading Korea’s National Assembly delegation, walks into a restaurant in Tokyo for a luncheon with Nam Gwan-pyo, Korea’s ambassador to Japan, on Thursday, after the delegation’s meeting with Toshihiro Nikai, secretary-general of the ruling Liberal Democratic Party, was canceled at the last minute earlier that day. [YONHAP]

A delegation of Korean lawmakers shelved Thursday their plan to find a political resolution to the escalating diplomatic row between Seoul and Tokyo in a sit-down with the Japanese ruling party leadership as a top politician repeatedly snubbed their scheduled meetings.

“We are not beggars,” Rep. Kang Chang-il of the ruling Democratic Party (DP) said Thursday as he expressed his anger after Toshihiro Nikai, secretary-general of the Liberal Democratic Party (LDP) of Japan, canceled his meeting with Korean lawmakers for the second time. “We won’t reschedule the meeting, because we are enraged.”

The National Assembly’s delegation of 10 Korean lawmakers was supposed to meet with Nikai, the second most powerful politician after Japanese Prime Minister Shinzo Abe in the ruling LDP, on Wednesday. He, however, canceled the meeting at the last minute, claiming he had to prepare for a legislative session. The meeting was rescheduled for 11:30 a.m. Thursday, but he canceled it again that the morning, citing an emergency party meeting on national security.

When he appeared on Japanese TV in 2017, Nikai said, “Korea is an important country, but an annoying one to have negotiations or dialogue with.”

His actions were interpreted as a de facto rejection to meet with the Korean delegation.

Kang said the Korean lawmakers, scheduled to depart for Seoul later in the day, will not meet with Nikai. “The [LDP] committed a serious discourtesy,” he said.

“We have delivered our messages enough,” Kang continued. “We now know the true intentions of the LKP and the Abe administration. We are not here to beg for diplomacy. We are here to deliver the Korean people’s message.”

Kang said Nikai’s decision to cancel the meetings was apparently influenced by Abe. “He has been friendly to Korea and maintained close friendships with Korean politicians including Prime Minister Lee Nak-yon,” said Kang. “I think Prime Minister Abe is the only person who can abruptly pressure him.”

Led by an independent lawmaker, Rep. Suh Chung-won, the National Assembly’s delegation of 10 lawmakers from the ruling and opposition parties visited Japan Wednesday. During their two-day trip, they were to meet with Japanese politicians and try to find a resolution to the bilateral diplomatic row.

Among the delegates were Rep. Kang, the chairman of the Korea-Japan Parliamentarians’ Union, and Rep. Yoon Sang-hyun of the Liberty Korea Party (LKP), chairman of the National Assembly’s Foreign Affairs and Unification Committee. Rep. Kim Jin-pyo of the DP is a former deputy prime minister of economy.

The lawmakers decided to visit Japan to meet with their counterparts as Tokyo imposed last month tighter export restrictions on three materials crucial for semiconductor and display production. They were to meet with the Japanese politicians this week as the Japanese cabinet was expected to approve a plan to delist Korea from the so-called white list of 27 countries that enjoy minimum restrictions on strategic goods trades.

The delegation met with 10 Japanese lawmakers of the Japan-Korea Parliamentarians` Union including its chairman, Fukushiro Nukaga of the LDP, on Wednesday.

During the luncheon meeting, Rep. Kim Jin-pyo of the DP asked the politicians to postpone the delisting decision until after President Moon Jae-in issues a message in his speech for the Aug. 15 Liberation Day, some participants of the meeting told the JoongAng Ilbo on Wednesday.

The Japanese politicians reportedly responded that Korea’s position will be delivered to Abe.

“If the Japanese government takes Korea off from the white list in early August, the Korean people’s anti-Japan sentiments will escalate to a peak,” Rep. Kim told the KBS on Thursday. “If that happens, President Moon, even if he wants to announce a message to Japan for a future-oriented bilateral relation, cannot do so.”

Kim’s remarks hint that the Moon administration may propose an alternative solution to resolve the diplomatic row prompted by the Korean Supreme Court’s rulings in favor of compensating victims of Japan’s forced wartime labor. In June, Seoul proposed that companies from the two countries jointly establish a fund to pay the victims, but Tokyo flatly rejected it.

The Korean lawmakers also visited the Komeito, the LDP’s partner in the current coalition government, and asked for its support. They, however, were met with strong resistance, according to the sources.

“The Japanese people are upset about Korea, because promises between the two countries’ governments are broken when the administration in Korea is changed,” Natsuo Yamaguchi, president of the Komeito, was quoted as telling the lawmakers.