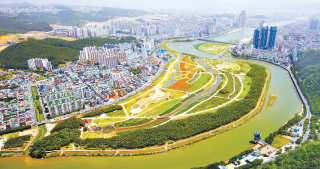 The Taehwa River Local Garden in Ulsan has become Korea’s second national garden, four years after the Suncheonman Garden was given the designation in September 2015.

The newly designated area runs from the Taehwa Bridge to the Suncheon Bridge, covering a total of 830,000 square meters (9 million square feet). This area, well known as a reserved natural habit for migratory birds, includes 29 large and small gardens.

The designation of national gardens in the Taehwa River Garden was first suggested after it was adopted as a pledge during the presidential election in 2017. It was one of the local promises made by the Moon Jae-in government to restore and preserve the polluted Taehwa River and to invigorate the city.

With the designation, Ulsan will receive 3 billion won ($2.5 million) to 4 billion won of annual government funds for administrative purposes starting in 2020. It is expected to produce revenues of 50 billion won and create 5,800 jobs by 2023, according to a report by the Ulsan Development Institute project.

The Taehwa River Local Garden is also considered a monumental work of ecological environment in Korea. The Taehwa River is emblematic of Ulsan, a city that was contaminated by heavy metals during industrialization from the ’60s to the early ’90s. Yet since being promoted to a metropolitan city in 1997, Ulsan has been transformed as a well-preserved city through the Taehwa River Revival Movement, which contributed to restoring water quality and cleaning up the area surrounding the river.

The Taehwa River National Garden became the nation’s first waterside eco-garden that has overcome its geographical condition of being vulnerable to flooding. The Buying the Land Movement in Taehwa-dong, a campaign by the residents to protect the forest from being destroyed by apartment construction in 1994, has also contributed to preserving a core part of the national garden.

As a result of this designation, Ulsan is looking forward to becoming an eco-tourism destination for domestic and overseas tourists.

The city of Ulsan will be commissioned to provide a detailed management plan for reorganizing the Taehwa River National Garden. The city will restore the garden to match its reputation as a national park and expand convenient facilities including parking lots for visitors’ convenience.

The proclamation ceremony of the Taehwa River National Garden will be held in mid-October.